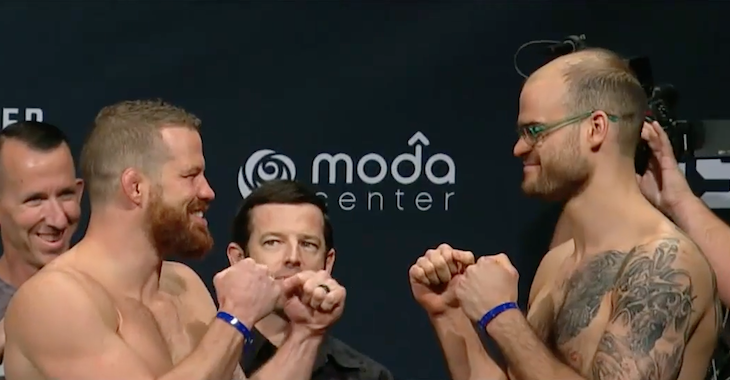 A middleweight bout between Nate Marquardt and Tamdan McCrory served as the featured fight of the UFC Fight Night 96 Fight Pass prelims in Portland, Oregon.

Round one begins and McCrory lands a leg kick to start. Nate responds with a hard leg kick of his own. Tamdan goes upstairs with a high kick. Both fighters exchange low kicks. Nate follows up with another nice outside leg kick. McCrory presses forward and pumps his jab. Nate circles away and then shoots in and lands a takedown. Tamdan attempts a guillotine choke but it is not there and he is forced to let go. Marquardt begins working from full guard. Tamdan is searching for a triangle choke but Nate is able to escape the submission attempt and moves to side control. McCrory scrambles and gets right back to full guard position. He is utilizing a rubber guard which is preventing Nate from landing any strikes. Marquardt finally lands an elbow as round one comes to an end.