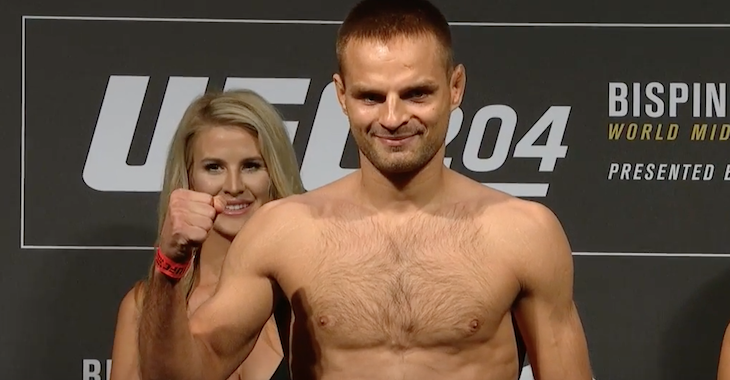 A bantamweight bout between Davey Grant and Damian Stasiak took place on the UFC 204 prelims in Manchester, England.

Round one begins and Grant lands a leg kick but Damian catches it and scores a quick takedown. He begins working from full guard. Davey scrambles and gets back to his feet. He presses forward and throws a spinning back fist that partially connects. He ducks a punch and presses Damian against the cage. Grant grabs a leg and drags him to the floor. Stasiak uses a butterfly hook to get back up to his feet but it is short lived as Grant takes him right back down. Damian works his way back to his feet and the fighters break. Grant comes forward with a knee but it misses the mark. He attempts a high kick but that also misses. Davey shoots in for a takedown but Damian is able to defend the attempt for now. Grant continues the pressure and scores the takedown but Damian sweeps him and winds up on top and in half guard. Round one comes to an end.

Round two begins and Grant comes in with a leaping side kick. Damian replies with a low kick and then charges forward and presses Davey against the cage. Grant breaks free and circles away. He lands a stiff jab and then a right hook. He scores a big knee and then another right. Damian looks to be in trouble but bites down on his mouth piece and presses forward. Grant catches him with a high kick and then another right hand. Damian circles away and throws a spinning back fist that misses. Grant presses forward and lands some solid strikes against the fence. The fighters break. Grant throws a kick but Damian catches it and lands a takedown. Grant pops right back up however and lands a good knee inside. More strikes from Davey. Damian shoots in and scores with a takedown. Grant lands some nice elbows from the bottom. Damian moves to the mount position but Grant is able to sweep him and take his back. After a scramble, Stasiak winds up in top position and round two comes to an end.

Round three begins and Stasiak lands a kick to the body to start off the round. Grant presses forward and lands a short left. He misses with a body kick. Davey is the aggressor here but has to be careful about getting taken down. Damian misses with a spinning back fist. Grant spins but elects not to throw a kick. Damian shoots in and scores a single-leg takedown. Davey scrambles and quickly returns to his feet. Damian shoots in but Grant reverses him and winds up on top. Davey is working some short shots from full guard. Stasiak locks in an armbar and it is tight. Grant tries to fight it off but is eventually forced to tapout.

Absolutely BRUTAL armbar finish by Damian Stasiak. That arm is going to be hurting for awhile. #UFC204 https://t.co/8BWj5PIFuG