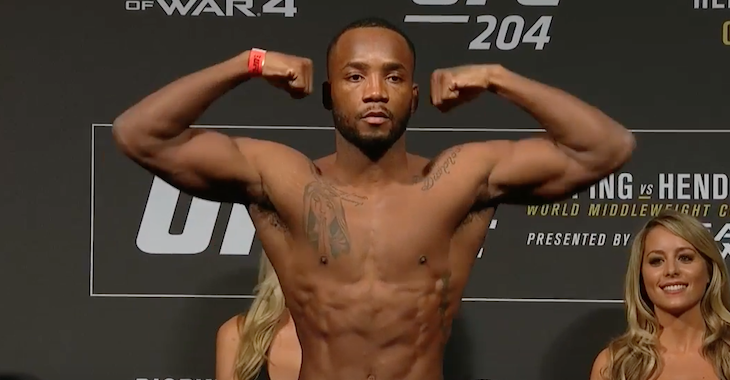 Round one begins and Edwards throws a front kick to the body to start things off. Tumenov is using some nifty head movement to try and get inside. Edwards misses with a combination but shoots in and scores with a takedown. Tumenov gets right back up to his feet, but Edwards is able to score a trip and drag Albert back to the ground. Leon moves to half guard and works a couple of short shots. He quickly pass to half guard but Albert scrambles and gets back to full guard. Edwards transitions back to side control and then quickly moves to full guard. Tumenov scrambles back to half guard. Good transitions here from both fighters. Albert scrambles and gets back up to his feet. Leon quickly shoots in and presses Tumenov back against the cage. He takes the back of Albert and sinks in one hook. The fighters battle for position. The referee sends out a verbal warning for the fighters to work. Leon is able to sink his second hook and flattens Albert out. However, the horn sounds to end round one before he can land any strikes.

Round two begins and Albert presses forward and lands a low kick. He is being more aggressive here to start round two. Tumenov misses with a left hook and then a back fist. Albert throws an uppercut that misses and gets countered with a left hand. Leon shoots in for a takedown but Albert shrugs him off. Tumenov presses forward and lands a right hand followed by a body kick. He continues his forward pressure and goes upstairs with a kick. Edwards seems to have slowed down here. Leon presses forward with a combo but the strikes miss there target. The fighters exchange jabs. Another jab from Albert and Leon fires back with a body kick. Edwards presses forward with a combo but eats a big left hook. Leon shoots in for a takedown but it is not there. Tumenov’s confidence is growing. He lands a nice combination. And another that ends in a solid uppercut. Leon grabs a hold of Albert and presses him against the cage.
Round two comes to an end.

Round three begins and both fighters seem happy to trade. Tumenov is trying to counter when Leon throws his jab. Albert is applying the forward pressure here. He connects with a left hook. Edwards circles away and then steps in with a jab. He shoots for a takedown but Tumenov stuff the attempt. A good body kick scores for Leon. Albert returns fire with one of his own. He scores a trip takedown on Tumenov. There is a scramble and Leon winds up on his back. He sinks in a rear-naked choke on Tumenov and this one is over. Wow! Talk about a quick submission.