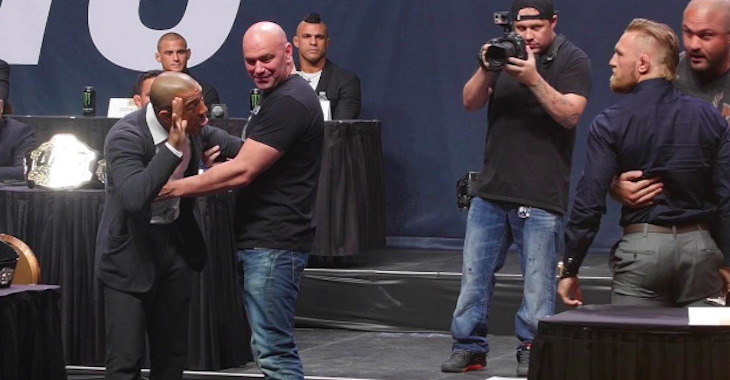 Over the last few years, the UFC has hosted several major, multi-fighter press conferences is an effort to promote its upcoming shows. These press conferences, which have included names like Conor McGregor, Ronda Rousey, and Jon Jones, have produced some truly memorable promotional material, and even a few skirmishes.

From the sounds of it, we’ll get another one of these massive press conferences to hype the promotion’s early 2018 shows, and we won’t have to wait long for it. According to Ariel Helwani, this star-studded event will go down this Friday in Las Vegas, ahead of Saturday’s end of the year card.

If you’re headed to Vegas this weekend for 219, you could catch a glimpse of some of the biggest names on the roster. UFC planning one of those star-studded pressers to showcase the first quarter of 2018 on Friday.

While we can’t say for sure, we can expect this press conference to include the stars of UFC 220, 221 and perhaps even 222, as well as the headliners of all the Fight Night cards occurring in early 2018. That would mean appearances from names like UFC heavyweight champion Stipe Miocic and challenger Francis Ngannou, UFC light heavyweight champ Daniel Cormier and challenger Volkan Oezdemir, UFC middleweight champion Robert Whittaker and challenger Luke Rockhold, as well as fighters like Doo Ho Choi, Jeremy Stephens, Ronaldo “Jacare” Souza, Derek Brunson, Lyoto Machida, Eryk Anders, Donald “Cowboy” Cerrone, Yancy Medeiros, and others.

What card are you most excited for in the first quarter of the new year?