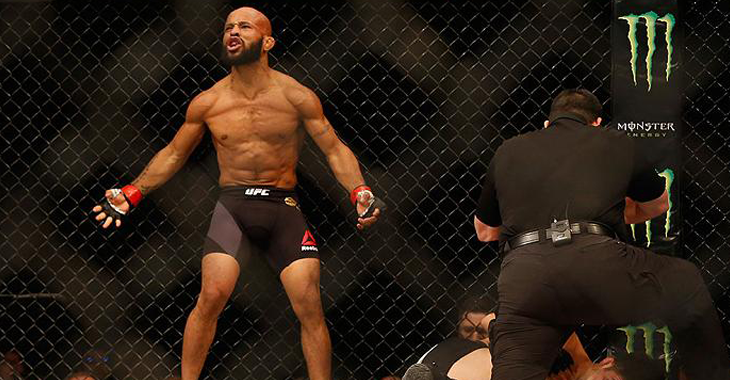 Despite that, the seemingly attractive fight card did not do well in terms of ratings.

According to Dave Meltzer (via MMAFighting) only 1.74 million viewers tuned in to UFC on FOX 24, resulting in the worst overnight ratings for any UFC event on FOX to date.

“Mighty Mouse” was able to dominate Reis both on the feet and on the canvas and ended up finishing the fight with an armbar in the third-round.With the win, Demetrious Johnson tied Anderson Silva for the most title defenses in UFC history with ten.

In the evenings co-main event, UFC women’s strawweight contenders Rose Namajunas and Michelle Waterson went to battle with the winner inching themselves that much closer to a shot at UFC gold.

Namajunas proved to be to much for “The Karate Hottie”, flooring Waterson with a head kick in the fights second-round.

From there, “Thug Rose” was able to secure a rear-naked choke submission which forced Waterson to tapout.

Whittaker was able to escape and early ground attack from the submission specialist in round one.

In round two Whittaker was able to hurt “Jacare” with a number of significant strikes including a high kick and right hand which sent Souza crashing to the floor.

Whittaker pounced on his wounded opponent with some solid ground and pound which prompted the referee to step in and stop the fight.

Whittaker’s victory over Souza caused a lot of buzz on social media. You can see the pros reactions here.

Demetrious Johnson’s drawing power has never done well in regards to pay-per-view numbers. However, he had done some decent numbers when headlining UFC on FOX events in the past.

Who do you think Demetrious Johnson, who is one of the greatest fighters of all time, has to fight in order to garner the interest of more fight fans? Sound off PENN Nation!