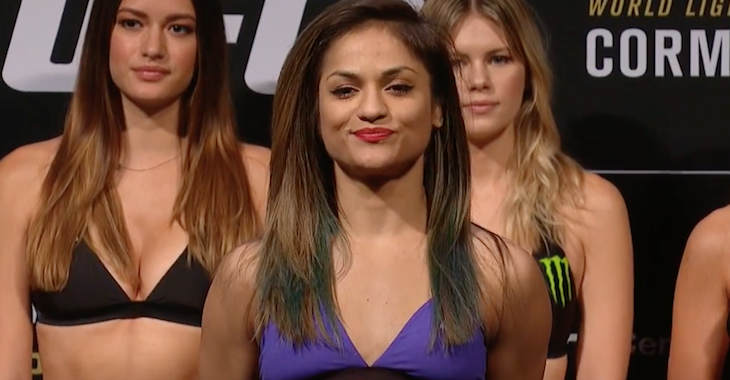 Round two begins and Calderwood lands a pair of kick to the body of Calvillo to start. Joanne is doing a good job early here in round two. She lands a low kick and then one to the body. A front kick now from Joanne. Cynthia leaps forward and lands a right hand. Joanne circles and then fires off a pair of body kicks, both of which land. Another good kick from Joanne and she follows that up with a right hand. Cynthia replies with a left hand. Joanne scores a spinning back elbow that sends Calvillo flying. She smiles back at Calderwood as if to say “nice job”. Calderwood presses forward and lands a left jab. Calvillo circles and lands a good punch of her own. Joanne comes forward with a body kick as round two comes to an end.

Round three begins and Joanne misses with a head kick to start things off. Joanne presses forward with back-to-back left jabs followed by a body kick. Calvillo circling. She leaps in and scores with a nice combination. Calderwood misses with a front kick and Calvillo counters nicely with a low kick. Cynthia shoots in for a takedown but Calderwood is able to defend the shot. A big cheer from the crowd follows. Calvillo leaps in with a combination. Joanne counters with a nice body kick followed by a left jab. Calderwood continues to press forward and just misses with a high kick. She throws another but Cynthia is once again able to avoid the strike. Calvillo lands a left. Joanne replies with a hard elbow. Two minutes remain in the fight. Calvillo leaps in with a combination. Joanne responds with a spinning back kick. Joanna lands a nice left hand. Calvillo shoots for a takedown but it is not there. Cynthia catches a kick and is able to score a takedown with just 30-seconds remaining. She immediately takes the back of Calderwood. The horn sounds to end round three.