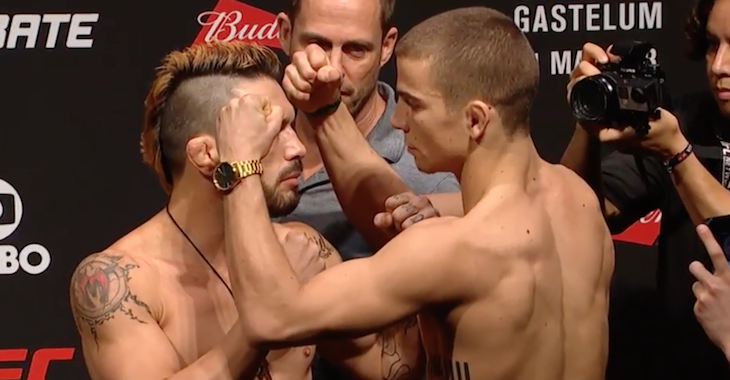 Round one begins and Jason comes forward with a leaping right hand. Kennedy goes upstairs with a head kick which is partially blocked. Kennedy circles and pops a nice jab. Jason charges forward but Jeremy avoids him and then connects with a leg kick. Rony comes forward and lands a nice jab to the body. He continues to press forward and lands a right hand. More pressure from Rony and he lands a flying knee. The strike knocks Kennedy to the floor but he seems to be ok. Jeremy quickly works his way back up and then presses Jason against the fence. Kennedy scores with a takedown. He lands some ground and pound before Jason returns to his feet. The stand-up is short-lived as Kennedy drags Jason back to the canvas. Good shots from the top by Jeremy. Jason scrambles and gets back up but Kennedy immediately brings him back to the floor. Kennedy with a nasty elbow from the top. He works some short shots and then a couple of hard elbows. Round one comes to an end.

Round two begins and Kennedy misses with an early combination attempt. Jason leaps forward and lands a left hand. He has Kennedy on the retreat and follows up with another hard shot, this time a right hand. Jeremy hits the canvas. Jason immediately jumps on Kennedy and begins unloading some hammer fists. Kennedy seems to have recovered but Jason is still on top and in full guard. Two and a half minutes remain. Kennedy is working on securing an arm-lock. Not much offense here from Jason. The referee steps in and tells the fighters to stand up. Kennedy with a high kick attempt which is blocked. He follows up with a low kick that connects with the groin area and sends Rony crashing to the floor. We break as Jason is given time to recover from the unintentional low blow. We restart and Kennedy misses with a left hook. Round two comes to an end.

Round three begins and Kennedy coms forward with a left jab. Jason showboats but Kennedy takes advantage and scores a takedown. Jeremy has Rony pressed against the cage. Jason is working hard to get back up and he does. Kennedy is still all over him however. The fighters break and Rony takes the center of the octagon. Kennedy ducks under a punch and scores a nice double-leg takedown. Good shots from the top by Jeremy. He lands a hard elbow to the forehead of Jason. Two minutes remain. Jason attempts a submission but ends up giving up his back. Big shots now from Kennedy. Jason scrambles back to his feet but is pressed up against the cage. He breaks free and there is one minute to go. Kennedy immediately shoots back in and lands another takedown. Big shots now from Jeremy. Jason scrambles but it thrown back to the floor by Jeremy. Round three comes to an end.