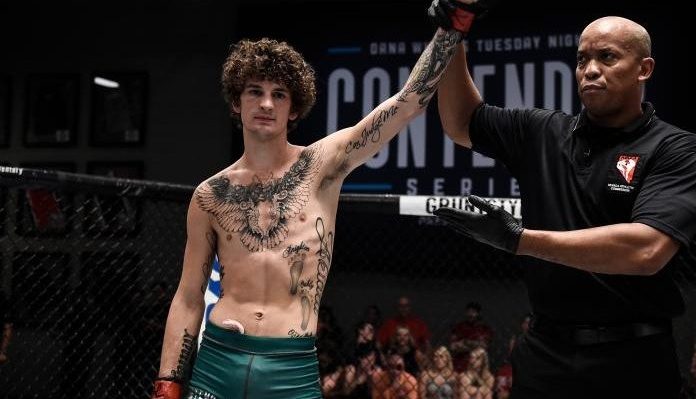 We all assumed that rising bantamweight prospect Sean O’Malley would be making his return at UFC 229. It just came down to who against.

Today on the Ariel Helwani MMA Show, O’Malley appeared as a guest where he revealed that he’ll be taking on Jose Alberto Quinonez on October 6th at UFC 229.

Since making his way into the UFC after earning a win and contract on season 1 of Dana White’s Tuesday Night Contender Series, the UFC has firmly put one of their spotlights on the 23-year old O’Malley.

Currently an undefeated 10-0, O’Malley has already racked up two wins under the UFC banner. His debut having came in December 2017.

In O’Malley’s last time out at UFC 222, he put on his best performance yet. But it didn’t come with a cost as he suffered a very bad foot injury that was so bad that he couldn’t even stand up for his post-fight interview.

Now all healed up, the Glendale, Arizona resident draws Quinonez for his third UFC bout.

For the 7-2 Quinonez, he entered the UFC as a cast member on The Ultimate Fighter: Latin America where he made it all the way to the finals before falling to Alejandro Perez (who was actually rumored to be getting this fight instead).

Since that loss in 2014, Quinonez has won four straight with his most recent being over Team Alpha Male’s Teruto Ishihara at UFC 221.

The card is continuing to shape up but here’s what we have scheduled so far (excluding what has already been mentioned):