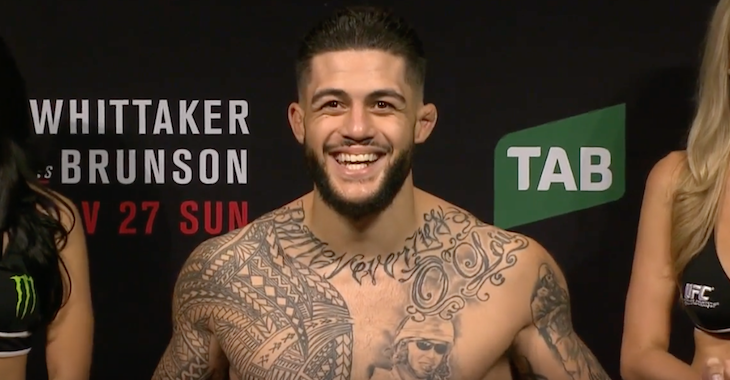 A scrap between Tyson Pedro and Saparbek Safarov kicked off tonight’s UFC 221 pay-per-view card in Perth.

Round one begins and Pedro immediately takes the center of the octagon. Safarov lands a leg kick. Pedro returns fires with a hard leg kick of his own. Safarov scores a single leg takedown. Pedro crawls his way to the cage and is able to stand back up. Impressive work. Pedro circles free and then comes forward with a knee. Safarov is searching for a single leg. Pedro just misses with a high kick. He scores with a follow up low kick. Safarov remains patient but Tyson charges at him with a right hand. It lands flush. He lands another and then another. Somehow Safarov remains standing. Pedro with a big kick and Safarov responds with a nice knee to the body. Safarov shoots in and presses Pedro against the cage. He works a takedown and takes the back. Pedro scrambles and locks a hold of a kimura submission. Safarov scrambles and rolls but Pedro adjusts and sinks it in even deeper. This one is all over, Safarov is forced to tap.