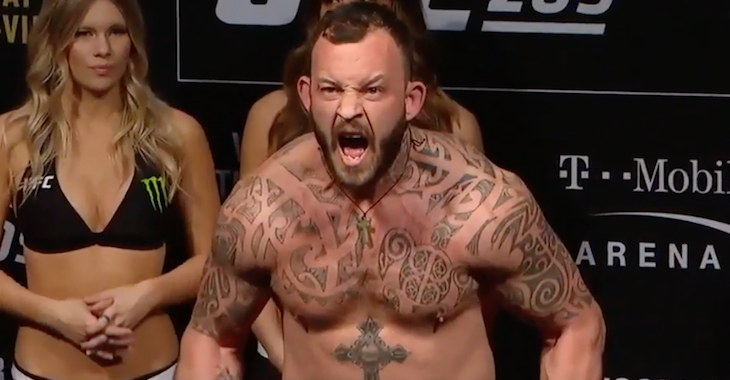 A heavyweight bout between Mark Godbeer and Daniel Spitz kicked off tonight’s UFC 209 prelims on FS1.

Round one begins and Godbeer quickly presses forward with a right hand. Spitz grabs a hold of him in the clinch and throws a couple of good knees. The fighters break and Godbeer lands a kick. He circles and then lands a left jab followed by another leg kick. Mark connects with a nice right hand. He charges forward with a shot to the body followed by a kick. Spitz returns fire with a push kick. Mark leans in and lands another right hand. Spitz circles out and lands a nice leg kick. Godbeer fires back with a leg kick of his own that drops Spitz momentarily. Mark charges forward with a combination and the fighters clinch against the cage. Spitz with a knee and then they break. Godbeer lands a nice low kick. Spitz returns fire with one of his own. Daniel just misses with a high kick. He follows up with a good jab to the body of Godbeer. He catches Mark with a knee inside. Both men exchange leg kicks. Godbeer presses forward and lands a nice combination. Spitz with a left jab but Godbeer answers with a hard right hand to close out round one.

Round two begins and Godbeer quickly charges forward and lands a right hand. Spitz shoots in for a single leg takedown but cannot get it. Godbeer breaks free and manages to land a right hand followed by an uppercut. He presses Daniel against the fence but a knee inside from Spitz forces the break. Both men connect with punches. Godbeer lands a big right hand that stuns Spitz. Mark presses forward but Daniel uses Godbeer’s momentum to score a takedown. Godbeer quickly gets back to his feet and then lands a shot to the body followed by an overhand right. He connects with a big uppercut and then a knee. Spitz is in trouble here. He is taking some deep breaths now. Godbeer connects with a left and then a low kick. Daniel is able to clinch and press Mark up against the cage. Godbeer breaks free and lands a nice combination to the body of Spitz. Daniel returns fire with a right hand. Godbeer presses forward and pushes Daniel against the cage. Spitz is able to break free but eats a right hand for his efforts. Round two comes to an end.

Round three begins and Godbeer connects with a nice left hook to start. Both men are able to land jabs. Spitz scores with a front kick to the body. Godbeer presses forward with punches and the fighters briefly clinch. Daniel connects with a straight right. Godbeer returns fire with a left low kick. Spitz lands a good kick to the body. Mark replies with a jab followed by a body kick. Two minutes remain. Both men are relying on single shots at this point. Godbeer connects with a huge right and then another. Spitz is hurt. He circles off the fence and throws a right. Mark walks right through it and lands a combination. The fighters clinch against the cage and Spitz lands two knees. Mark replies with one of his own. They break. Godbeer misses with a left hand but is able to push Spitz against the cage. The horn sounds to end round three.