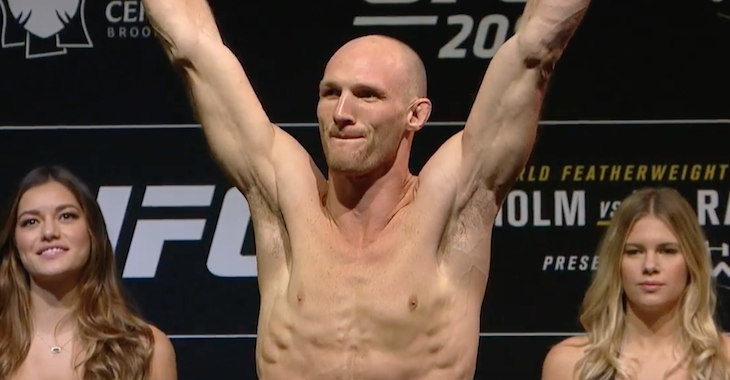 Round one begins and Ryan quickly takes the center of the octagon and lands a hard body kick. Roan circles out and attempts a head kick that misses. He returns fire with a low kick that connects flush. Ryan eats the blow and presses forward landing another hard body kick. LaFlare continues his forward pressure and lands a jab followed by another kick. Roan returns fire with a hard leg kick. He shoots in for a takedown but Ryan hits a switch and winds up in top position. LaFlare in half guard now. He begins working some short elbows. Ryan decides to stand up and lands a nice jab followed by a hard body kick. One minute remains and LaFlare lands another hard kick. Roan pushes Ryan against the fence and begins working from the clinch. The fighters break and LaFlare charges forward with a series of punches. Round one comes to an end.

Round two begins and Ryan starts off with some immediate pressure. He lands a hard kick to the body of Roan and then follows up with a flurry of punches. He lands a hard left and Roan hits the deck. LaFlare follows him to the floor and begins working from full guard. Nice shots to the body here from Ryan. Roan is rolling for an armbar but it is not there. Elbows from LaFlare who then opts to stand back up. Ryan misses with a body kick attempt. Roan responds with a nice inside leg kick. Another good shot from LaFlare drops Carneiro, Ryan pounces on him and begins working some good ground and pound. He is working from half guard but Roan seems to have recovered and ties him up from the position. They stand back up just in time to trade punches before the horn sounds to end round two.

Round three begins and Ryan continues his forward pressure he misses with an early combination. He continues to press forward and catches Roan with a hard body shot. He misses with a wheel kick but then is able to shoot in and score another takedown. Roan scrambles and gets back up to his feet but eats a right hand for his troubles. Carneiro scores with a right hand of his own and then a leg kick. Ryan presses forward and pushes Roan against the cage. He begins working some knees. Roan breaks free and circles out. LaFlare lands a nice combination. Two minutes remain. Laflare lands a hard body kick. Roan shoots in for a takedown attempt but Ryan defends. Roan pushes Ryan against the fence and then scores a takedown. He begins working from half guard. LaFlare looks to lock up a kimura from the bottom. He lets it go and eats a left hand from Roan. Carneiro has 30 seconds to make something happen. He steps over in to mount and begins working some shots. Round three comes to an end.