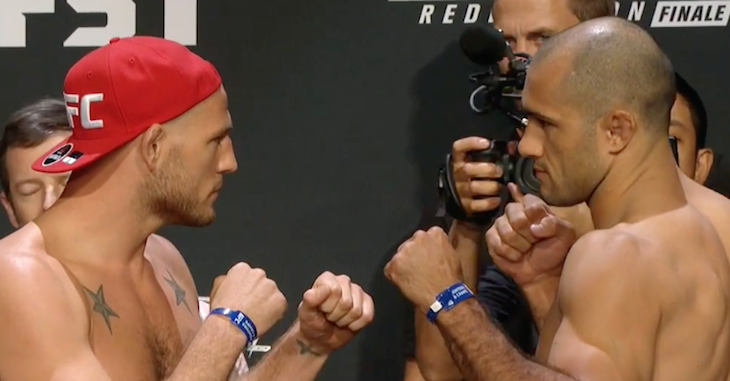 Round one begins and Johnson starts things off with a right hand. Fortuna replies with a leg kick. Johnson with a jab and then drops Fortuna with a right over the top. Fortuna looks to grab an armbar and then quickly scrambles back up to his feet. Johnson with a nice combination. He throws a huge right hand that misses the mark. Johnson grabs a hold of Marcel and pushes him against the cage. He moves to his back and then attempts a takedown. Fortuna grabs the fence and is able to avoid. That was not good. Still the fight goes on and the fighters break. Johnson paws with his left jab. Fortuna scores with a leaping left hook and then an uppercut. Both men connect with left jabs. Johnson circles and then scores with a left hand. Fortuna goes to the body with a kick. Johnson fires back with a left hand and the horn sounds to end round one.

Round two begins and Johnson scores with a left jab to start things off. Fortuna misses with a head kick but then scores with a left kick to the body of Jordan. Fortuna lands a nice left hook and then grabs a hold of Johnson. Jordan is able to shake Marcel off and break free. Johnson comes forward and partially connects with a right hand. More pressure from Johnson but he eats a counter left. Jordan eats the shot and then scores with a left kick to the body. Fortuna connects with a hard left hook. Johnson attempts to shoot in for a takedown but Marcel stuffs the attempt. Fortuna with a right hand and then an uppercut. Johnson continues to press forward but eats a head kick. Johnson ducks under a punch and then connects with a left hook. Fortuna responds with a pair of hard low kicks. He follows that up with a right hand. Johnson shoots in and presses Fortuna against the cage. Marcel works some short shots to the body. Johnson grabs a leg and scores a takedown. He lands a pair of hammer fists before Fortuna scrambles back up to his feet. They exchange punches as the horn sounds to end round two.

Round three begins and Johnson immediately gets busy with a combination. He scores with a nice right hand. Fortuna shoots for a takedown but it is not there. Marcel is able to land a left hook. Johnson is applying the pressure. He scores with a left hook and then a jab to the body of Marcel. Fortuna replies with a right but then eats a counter left from Johnson. Marcel scores with a right hand and then an uppercut. Johnson continues to press forward but misses with an attempted left hand over the top. Fortuna feints and then drops down for a takedown. He cannot secure it. Johnson with a left jab. Fortuna responds with a hard left hook. Both men appear happy to trade leather now. Johnson with another left. Fortuna decides to shoot in but cannot secure the takedown. The fighters clinch and work against the cage. Not much action here. They break and both men miss with big punches. Fortuna lands a nice kick and then another. Johnson goes to the body with a left hand. The horn sounds to end round three.