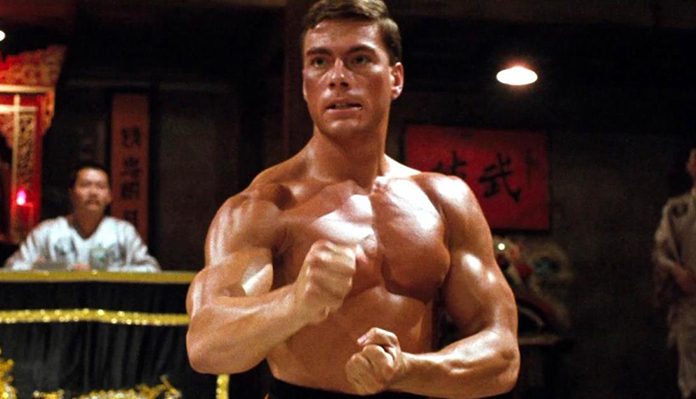 Part two in a series celebrating badassery in film and TV

Considering the high-stakes drama that goes on inside the MMA cage, it’s no wonder that Hollywood has caught on. UFC stars like Ronda Rousey and Rampage Jackson appear in blockbuster films, while a number of action flicks have delved into the no holds barred world of mixed martial arts.

But while there are scores of movies about kickboxing and underground tournament fights, only a select few flicks capture the visceral, bone-shattering experience of the MMA world. Read on for a look at the toughest, most brutal mixed martial arts movies. And for more thrilling action, catch the third season premiere of Into the Badlands April 22nd at 10/9c on AMC.

Warrior (2011)
Easily the most moving film that also features brutal kicks to the head, Warrior is the rare MMA movie that combines intense action and subtle character drama. Tom Hardy and Joel Edgerton earned raves for their roles as brawling brothers who work out their differences in the ring. Director Gavin O’Connor captures both the visceral nature of MMA combat (leglocks, chokeholds, kneebars, etc.) and the camaraderie and familial bonds in the sport, while Nick Nolte scored an Oscar nomination for Best Supporting Actor for his role as the brothers’ grizzled pop. The stellar cast is rounded out by some real-life MMA heavyweights, including Erik Apple as the intimidating brawler “Mad Dog” Grimes. Never Back Down (2008)
The Karate Kid of the MMA movie genre, Never Back Down follows troubled teen Jake Tyler (Sean Faris) who trains with a mixed martial arts master (Djimon Hounsou) in order to compete in underground fighting tournaments. Hounsou brings depth to the role of Master Roqua, an inspirational Mr. Miyagi-type, while Cam Gigandet channels classic ‘80s jerk William Zabka as the blonde bully who Tyler faces off against in the ring. While more “teen Fight Club” than UFC, Never Back Down is a fun throwback to movies where average kids can become fighting champs after some intense training montages. Blood and Bone (2009)
Michael Jai White (Spawn, Black Dynamite) shows off his impressive martial arts skills as the awesomely named Isaiah Bone, an ex-con who gets involved in a Mob-run underground fighting ring. While it’s yet another movie about MMA-style combat in unsanctioned tournaments, Blood and Bone earns some cred by featuring Gina Carano and the late Kimbo Slice in some knock-down-drag-out brawls. It’s also a great showcase for Michael Jai White, whose roundhouses and jabs are as effective in the ring as the real MMA champs he’s pitted against. Tapped Out (2014)
UFC tough guys Krzysztof Soszynski, Anderson Silva and Lyoto Machida star in this action thriller about a teenager (Cody Hackman) who gets involved in cagematch fighting in order to get revenge on the man who murdered his parents. The well-choreographed fights involving actual MMA fighters makes up for the cliché-riddled script and the implausibility of a scrawny teenager facing off against a powerhouse like Soszynski. Bonus for Karate Kid fans: Martin Kove, aka the “Sweep the Leg!” Cobra Kai sensei, pops up as the hero’s principal! Redbelt (2008)
You might expect a MMA movie written and directed by David Mamet (Glengarry Glen Ross) to be a boring talkfest. But the acclaimed playwright is actually a skilled martial artist and brings a love for the sport to this moody tale of a Jiu-Jitsu teacher (Chiwetel Ejiofor) who gets embroiled in a rigged fighting tournament and runs afoul of shady promoters, corrupt cops and an aging movie star played by Tim Allen. Mamet’s script features all the twists and turns of his acclaimed films House of Games and The Spanish Prisoner, while MMA fighters Randy Couture, Enson Inoue and John Machado bring authenticity to this dark look at what goes on both inside and outside of the ring. Fighting (2009)
This film from writer/director Dito Montiel sets itself apart from other underground street fighting tales thanks to its stellar cast. Channing Tatum stars as an up-and-coming fighter who catches the eye of a shady promoter played by Terence Howard. Tatum, a rare movie hunk who could actually pass for a street fighter, is his usual charming self while Montiel conjures up the same gritty tone he brought to his previous collaboration with the Magic Mike star, A Guide to Recognizing Your Saints. Bloodsport (1988)
This ‘80s cult favorite from the action-meisters at Cannon Films earns a place in fighting movie history for showcasing a variety of combat styles. Jean-Claude Van Damme plays army captain Frank Dux who takes part in Kumite, a lethal tournament where the world’s top fighters compete to the death. Based on the real Dux, a martial artist whose claims of fighting in “Kumite”-style bouts were later disproven, Bloodsport helped to launch Van Damme’s big screen career and popularize competitions where brawlers use kickboxing, jiu-jitsu and other fighting techniques to do some serious damage. Here Comes the Boom (2012)
Every sport eventually gets a cheesy comedy, and MMA has one thanks to Kevin James. “Paul Blart, Mall Cop” himself stars as a former college wrestler turned high school biology teacher who enters a UFC competition in order to raise money for his school. Antics and heartwarming drama predictably ensue, but despite its flaws, the film features some effective combat scenes and a fun cast that includes Salma Hayek, Henry Winkler, Bas Rutten and Mayhem Miller. In the mood for intense, bone-shattering brawls? Catch the premiere of the third season of Into the Badlands Sunday, April 22nd at 10/9c on AMC.