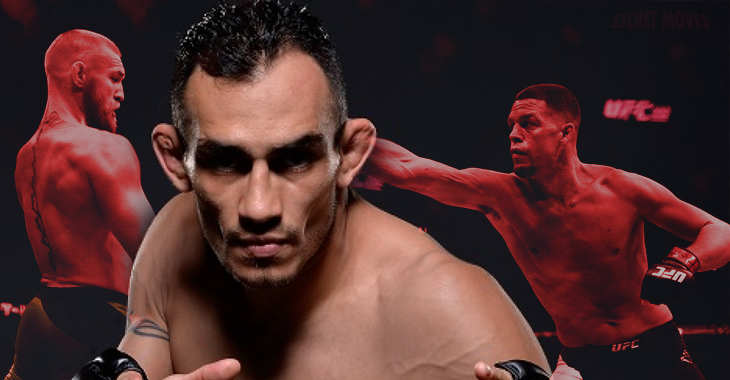 Tony Ferguson has never been the kind of guy that holds anything back. He’ll walk into anywhere, shades permanently on his face, and speak his mind to anyone. If you’re not careful, he may start to demonstrate some new hybrid breakdance combat move that he invented right in front of you. He was in rare form though, speaking to the guys at Submission Radio while driving en route to a secluded training camp. Tony Ferguson was asked about Conor McGregor’s return and Nate Diaz, then fire emoji came out of Ferguson’s mouth one after another.

“[Nate Diaz and Conor McGregor] are a bunch of b-tches. They want to go and they want to talk – look, we can f-cking put this sh-t out on video and we can make this a money fight. If you guys really wanna get gangster, let’s do that sh-t. If you want to f-cking put on money, let’s put it on paper. Nate, I will f-ckin’ Stockton slap the sh-t out of you, kid. You don’t f-cking know me, dude. Straight up. Same thing with Conor McGregor. You guys are a bunch of b-tches, and you guys are a bunch of fakes. If you wanna’ fight while we’re here in the UFC, why don’t you come and sign on the dotted line after you get your sh-t together and defend your f-cking belt, Conor?”

“If that’s my belt and he has the belt, they need to unify both belts, f-ck that Nate Diaz three sh-t. Both those b-tches f-ckin’, they want to try and act like they want to go and make money. Nate don’t want to fight, he’s trying to recover from a f-cking hit that he took with his management and all those other things. McGregor’s gotta’ defend or vacate. He’s gotta defend that belt, he needs to come back. If not, there goes his legacy, there goes the UFC sh-t. I mean, really, legitimately, why do we have rankings? Why do we have a belt system? Why do we have all this other stuff?”

If Tony Ferguson sounded on edge, it’s because it is getting close to his fight with Kevin Lee a month from now at UFC 216. He’s off to a hand-built camp he’ll construct in Big Bear, where he will finish the final leg of his training for the fight. The last time he did this, was just before he put on the performance of his career so far by beating Rafael dos Anjos. If that is any indication of what his secretive altitude training can do, then we’re in for a show on October 7th.