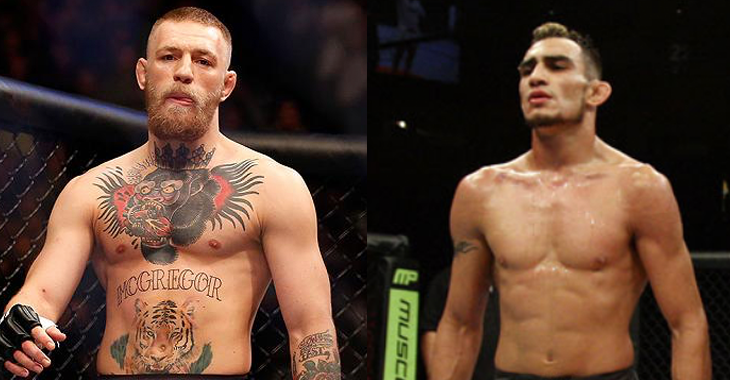 Conor McGregor has already dropped some major hints at his next fight. He’s put his foot down time and time again saying he fully intends to fight in the UFC at the end of the year, where all signs point to a trilogy fight with none other than Nate Diaz. Both his previous fights with Diaz weren’t for a belt, nor were they even in McGregor’s weight class, they were prizefights for money and pride. That’s all well and good for McGregor, but not good for Tony Ferguson. El Cucuy is scheduled to fight Kevin Lee at UFC 216 for the interim UFC lightweight title, since Khabib Nurmagomedov is perpetually inconsistent and McGregor is off ‘playing grab ass’ in a boxing ring. Needless to say, Tony Ferguson isn’t happy when he talked to media about the buzz that McGregor will come back to fight Diaz instead of him.

Strong words from @TonyFergusonXT in a message for @TheNotoriousMMA after he's done "playing grab-ass" in boxing: Fight the right Mexican. pic.twitter.com/YZUc68vuCg

“What a jack-off. You have a trilogy fight? You are f-cking ridiculous. You need to defend or vacate. I know where your heads at, man. You f-cking want to be a money fight. Look, you’re fighting the wrong Mexican. You got to fight the one with the messed up ears, man. The one you’re fighting is into bikes and doing all this other kind of stuff. Not a bad thing, but when you get done done playing grab ass in the boxing ring, you need to come back over here and defend or vacate.” It’s hard to pick a right or wrong. On one hand, Conor McGregor did vacate his featherweight title and he just beat Eddie Alvarez for the lightweight title in November. This sort of time frame isn’t anything unusual for a UFC title defense. Also, Tony Ferguson airing grievances about a money fight when he’s himself trying to get the same thing against McGregor, the title being on the line is really just a formality to use as leverage. On the other hand, in an ideal world, a true champion would defend against all comers, not just the ones who would make him the most money. But Conor McGregor isn’t Georges St-Pierre or Demetrious Johnson (who got hated anyway for actually doing the opposite of McGregor), this is the Champ Champ and he does what he wants.