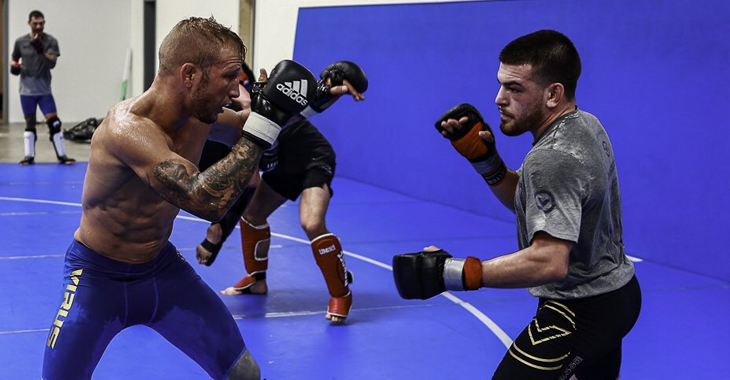 Jose’ Shorty’ Torres is the Titan FC bantamweight and flyweight champion, the only thing he’s been knocking on more than his competition is the UFC’s door. He’s pestered them for over a year now, so much that matchmaker Mick Maynard had to block him. His luck may have changed last night though at Titan FC 46. The champ champ revealed before his fight that the UFC reached out and said they’d work something out with another win. Spoiler alert, he won.

“Mick Maynard obviously blocked me on social media. Hey, I’m annoying. I get it. They contacted me before this fight and they go, ‘Hey, after you win this fight, give us a call and we’ll figure something out.’ I personally want to fight December 30th [UFC 219]. I want to make up for lost time and really just have a lot of fun in there and put on a spectacle. Mainly to end 2017, I said as my New Year’s resolution that I will be in the UFC in 2017 and I still stand by that today.” — Jose Torres speaking to Fightful.

He’s already held up his end of the bargain. In the fourth round of his fight with Gleidson DeJesus last night, Torres choked DeJesus out, successfully defending his bantamweight belt. Jose’ Shorty’ Torres has already received more chances than most. He was offered to fight on Dana White’s Tuesday Night Contender Series three times. The UFC also rang him up to to fight Justin Scoggins on short-notice fight. Unfortunately he had to decline all four times due to injuries. However, now Torres has left those nagging demons behind and has set his sights on greater things. This time, Torres is ready.

What Jose Torres has done since signing on with Titan FC has been utterly ridiculous. In ‘Shorty’s’ last four fights, he’s won and defended both the Titan FC flyweight and bantamweight titles. To top it all off, he’s undefeated and trains with UFC bantamweight champ TJ Dillashaw. There’s not much left to accomplish other than fight for the biggest MMA organization on the planet and test himself against the best competition in the world.

“[The UFC] were like, ‘Hey Shorty, we need a last-minute guy. You’ve been complaining to us that you want to fight. And I go, ‘I’m sorry, I’ve been injured. I really appreciate you giving me the call, but I’m not gonna’ fight until November. I want to be able to get a full training camp to know that I am 100 percent and to know that I can do this without hurting myself again — I want to heal just once.’ […] It was more, realistically, I can’t take the fight right now; I’m injured. I definitely know they understand, and I’m a young prospect coming up. I think because of my record and my accolades and everything I’ve been able to do, after Nov. 17, if everything keeps on going on a high note, it’s really hard for them to deny me.” — Jose Torres speaking to Bloody Elbow.