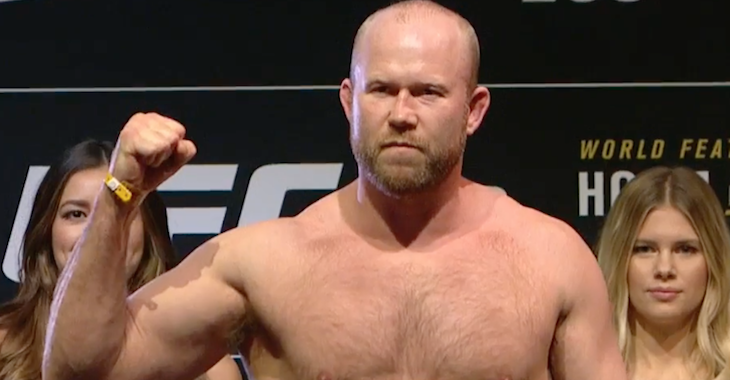 On Sunday night, the UFC touched down in Oklahoma City, Oklahoma with UFC Fight Night 112. In the co-main event of this 13-fight card, former UFC welterweight champion and Oklahoma’s own Johny Hendricks took his second fight at middleweight opposite dangerous veteran Tim Boetsch.

Though Hendricks won his first bout at middleweight, things did not go so well in his second fight in the division. After a relatively slow first round, Boetsch planted a crushing head-kicked on his foe’s head, trapped him against the cage, and force-fed him a multi-course meal of uppercuts until he crumbled to the mat in a dazed heap.

With this win over the former welterweight champ Hendricks, Boetsch rebounds from a stoppage loss to long-time contender Ronaldo “Jacare” Souza. He’s earned three TKO wins in his last four fights, and is now 21-11 overall.

Hendricks, meanwhile, returns to the loss column after a nice win over Hector Lombard. He’s now 18-7 overall, and a tough 2-5 in his last 7 fights.

What did you think of Tim Boetsch’s big win at UFC Fight Night 112?