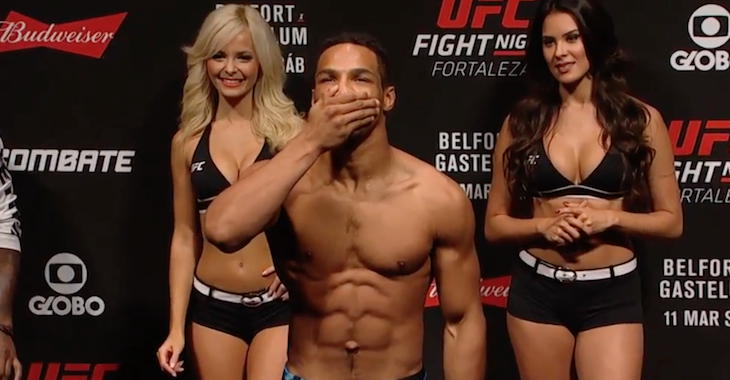 On Sunday night, the UFC touched down in Oklahoma City, Oklahoma with UFC Fight Night 112. In the main event of this 13-fight card, Michael Chiesa and Kevin Lee sought to settle a beef stemming from a press conference brawl in an anticipated, five-round lightweight battle.

As many expected, this one was an exciting, back-and-forth affair that occurred primarily on the mat. Unfortunately, the end of the bout was mired in controversy, as Lee took the back, locked up a rear-naked choke, but referee Mario Yamasaki stopped the action before Chiesa tapped. Though the choke was undeniably deep, and Chiesa seemed to be on the verge of tapping, no tap actually occurred.

See this strange moment below:

Regardless, this will fight will enter the history books as a first-round submission win for Lee. With this outcome, he moves onto a five-fight streak, building on the momentum of defeats of Francisco Trinaldo, Magomed Mustafaev, Jake Matthews and Efrain Escudero. He’s now 16-2 overall.

Chiesa, meanwhile, has a three-fight win-streak derailed by this loss, as he returns to the loss column after wins over Mitch Clarke, Jim Miller and Beneil Dariush. He’s now 14-2 overall.

Do you want to see Kevin Lee and Michael Chiesa rematch, or are you satisfied by the outcome of the UFC Fight Night 112 main event?