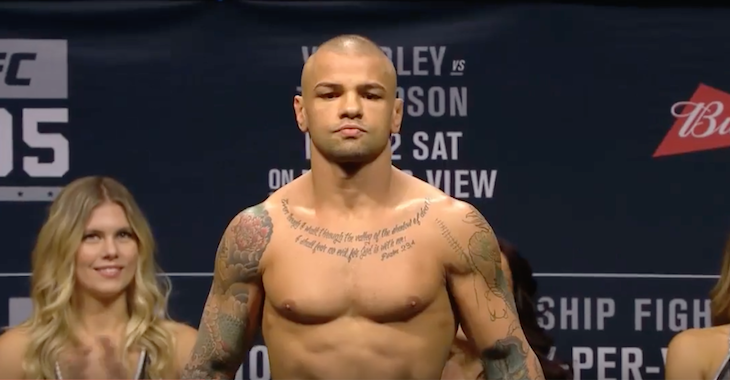 Last weekend, in the co-main event of the UFC’s latest trip to Pittsburgh, PA, “Platinum” Mike Perry picked up yet another brutal KO, this time over UFC debutant Alex Reyes. Reyes was not, however, the man Perry was initially supposed to fight. Instead, Perry was expected to battle former UFC welterweight title challenger Thiago Alves.

Unfortunately, Alves made a late exit from the fight, worrying for his family in Florida as the massive threat of hurricane Irma loomed. On Sunday evening, the Brazilian striking specialist issued a lengthy statement on his choice to withdraw from the fight:

“This was my first hurricane as a husband and father,” Alves said in his post to Instagram. “The safety of my family [is] my duty and they will always come first! Still, i did make every attempt suggested by the UFC Travel Team to get to Pittsburgh besides taking a ‘Road Trip’ with my wife and my 13 months son when the whole state of FL was evacuating. All my flights continued to get cancelled from Friday am all the way to Tuesday 11 pm. After spending 6 hours at the airport with no real idea when I would make to the fight, having no electricity, sleeping in the gym with my family, and dealing with my dog dying from heat exhaustion… I decided to stay with my family and rebuild. I will never apologize for that, it’s not in my nature. I have too much love and respect for my Sport, Family, Team and the MMA Fans to go to war not being 100% ready. Me and the UFC are in great terms, they understand my decision. I’ve been with the company for 12 years. I’ve known Sean Shelby for a very long time and he knows I always come to fight. I trained for 16 weeks bc this fight was originally happening in August. If I don’t fight I don’t get paid, so nobody suffers but Me and My Family. I’m ready and will stay ready. I should be rebooked by December. My support to everyone that went through Hurricane Irma. My thoughts and prays are with you.”

Hard logic to argue with from Thiago Alves!