Stipe Miocic reclaimed his heavyweight belt back in August with a fourth-round TKO victory over Daniel Cormier in their highly anticipated rematch. The Cleveland native holds the record for most UFC heavyweight title defenses.

For many, they believe Miocic is the heavyweight GOAT. But, his first fight with Cormier proved he is beatable, as he was quickly knocked out by ‘DC’ in the opening round. Yet, the champ is very well-rounded with his wrestling and striking. So, who has the best chance of ending his reign once again?

Miocic’s next fight will no doubt be against Cormier. If he gets his hand raised there he has a slew of contender waiting for him. The winner of Francis Ngannou-Jairzinho Rozenstruik is likely to be next after Cormier. But, I believe the person who has the best chance to end Miocic’s reign is Curtis Blaydes.

Blaydes is someone many have considered to be a future UFC champion. Yet, he had two setbacks by losing to Francis Ngannou twice. Since then, “Razor” has rebounded nicely as he has notable wins over Alexey Oleynik, Alistair Overeem, Shamil Abdurakhimov, and most recently scoring a second-round TKO win over Junior dos Santos. 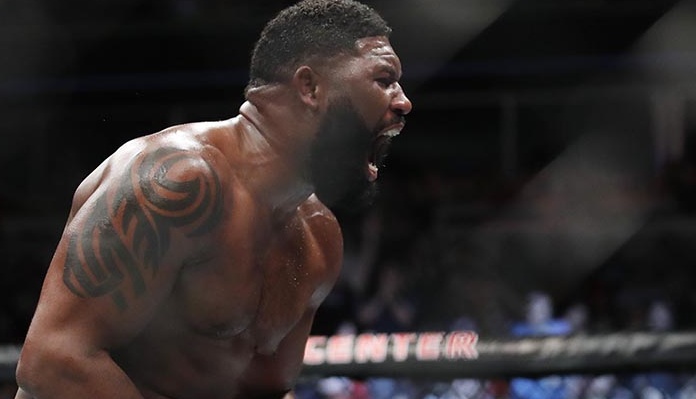 Why Blaydes poses so many problems for Miocic is due to his wrestling. We saw in the second Cormier fight, “DC” was able to take the champ down multiple times and held him there for the entire first round. The problem with Blaydes is he has vicious ground and pound and often finishes fights when he gets his opponent to the mat.

Blaydes lands an impressive 57 percent of his takedown attempts. Miocic, meanwhile, has a 75 percent takedown defense. But, Razor uses his chain-wrestling where if he doesn’t get the first attempt, he will keep on trying and most likely land one as he averages 6.79 takedowns per 15 minutes.

On the mat, Blaydes is the better grappler and his ground and pound could easily end the fight. On the feet, Miocic is the better striker, but as evident by the dos Santos scrap, Razor is getting better. He TKO’d JDS without using his wrestling showing his improvement in the standup department.

Where Blaydes also threatens to have an edge is in the cardio. He easily goes three rounds using his grappling which tends to gas his opponents out. Having Miocic carry his weight on the ground should, in theory, gas the champ out and leave Blaydes to have success.

When Curtis Blaydes will even be able to get a shot at Stipe Miocic is unknown at this point. But, looking down the heavyweight division, there is no question ‘Razor’ poses one of the biggest threats to Miocic.

Do you agree that Curtis Blaydes has the best chance to end Stipe Miocic’s reign? Let us know in the comment section.

ICYMI: We already looked at who has the best chance to end the reigns at bantamweight, featherweight, lightweight, welterweight, middleweight, and light heavyweight.