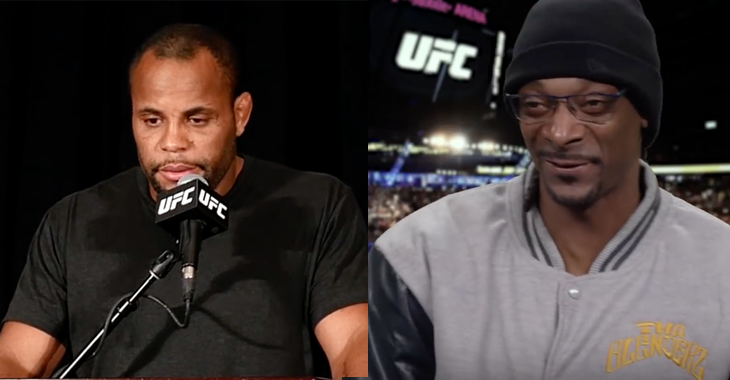 Rap icon Snoop Dogg has long been apart of UFC champion Jon Jones’ team. Back in April, Snoop once again showed off his loyalty to Team Jones by declaring that he wanted to walk Jones to the Octagon for his return fight:

“Champ, when you get back in the ring with that motherf*cker “DC” Cormier, I wanna walk you out while you kick his motherf*ckin’ ass,” Snoop says in the video.

“Skinny “Bones” Jones is the baddest motherf*cker to ever walk in the Octagon,” he said. “That’s my homeboy, and they’re gonna let him back in. Then they’re gonna make smoking weed legal in the UFC.” “You shouldn’t have been talking all that sh-t when he was on suspension. Never talk about a man when he’s down; you wanna pick him up when he’s down.”

Cormier has been silent on the matter following the fight. Prior to the fight however, Cormier spoke on the ‘beef’ questioning why Snoop backed Jones in the first place: “I don’t know, I’m a fan of Snoops, so I don’t know what Snoop’s issue is with me,” Cormier said. “Having a little fun, I guess he didn’t like it.

“I think he and Jon may have some sort of relationship previous to him seeing my fight. He’s free to cheer for who he wants, you know he can just be disappointed after I beat Jon Jones. But, sorry Uncle Snoop, you can be friends with Jon but you’ll want to be my friend after I whoop your boy.”

“It sucks so bad! It’s somebody that you actually like, you know? I been listening to his stuff, his first album. It’s like, what? You like Jon? But, we all know Uncle Snoop is a big advocate of the Mary Jane and we all know Jon’s problems,” Cormier said with a laugh. “Maybe that’s the bond that connects them. I don’t know. They were backstage at a Snoop concert once so, we know how Jon gets down.”

Only time will tell if the former champion will choose to respond to Snoop once again.