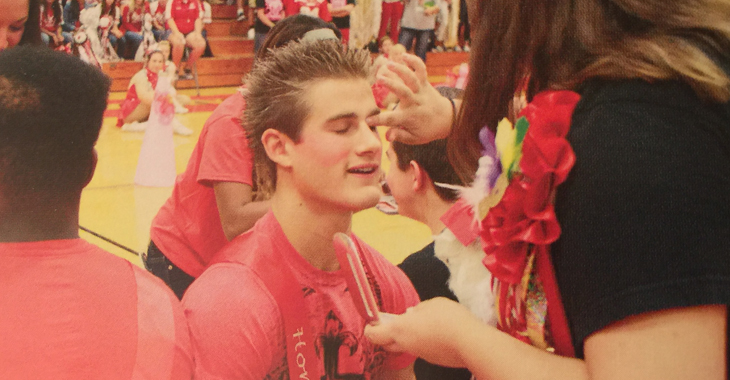 Sage Northcutt was last seen at UFC Norfolk putting on one of the best performances of his career against Michel Quinones. It was his first trip to the cage after training with Team Alpha Male and it looked like it paid off. This turning point in Northcutt’s career is a perfect time to take a look back at the his formative years. Thanks to a thread on Imgur, a fellow classmate of Sage Northcutt posted a ton of photos from his annual giving us a peak into what life was like for Northcutt in the class of 2012. Surprisingly, the bright-eyed UFC fighter isn’t that much different than he was back then. It should be of no surprise to you that Sage Northcutt was both homecoming king and voted most polite by the students at Katy High School. He was also still ripped as a high school senior. That’s right, just a blonde, undefeated Karate kid with washboard abs holding doors open for anyone who has the pleasure of passing him by. This dude has been a chiseled gentleman all of his life. Not only did Northcutt drive a sweet, cherry red 2010 Camaro in high school, he won it from kicking opponents better than anyone else. He had wanted one ever since watching Transformers, which is one of the most Sage Northcutt reasons ever. Hopefully, word of this gets around and he’s in the next Transformers movie saying ‘yes sir’ to all of the Autobots. They wouldn’t even need a stunt man.

“I like my car. It is fast and I’ve liked it since I first saw the Camaro in the Transformers movie. I got my car as a present for winning the World Karate Championships and getting into Black Belt Magazine’s Hall of Fame.” – Sage Northcutt in his high school annual. It looks like we could have been robbed of this smiling Adonis in the UFC had he decided to wrestle in college. While Northcutt did end up attending Texas A&M University, it wasn’t long before he decided that his fighting career took priority and he dropped out to pursue the UFC full-time.

“Since my very first fight in the UFC, it was about two years ago, I was 19 years old. I was studying in school at the same time. I was coming out of high school. I was actually in college at Texas A&M University, so my very first fight, I was doing school at the same time. My next few fights, I was in school. But now I’ve withdrawn from school, and I’m focusing full-time on the UFC and fighting. Now I’m training at Team Alpha Male, one of the best teams in the world, and I’m growing as a fighter, getting better and better.” – Sage Northcutt speaking to MMA Junkie.

77 World Karate titles, three-time NAGA World Grappling champion, three-time Texas State Kickboxing champ, 2012 Black Belt Magazine Hall of Fame, Katy High School Homecoming King and voted ‘Most Polite’. Not bad for a high school senior with his entire life ahead of him. It will be interesting to see what the next five years look like for Sage Northcutt.