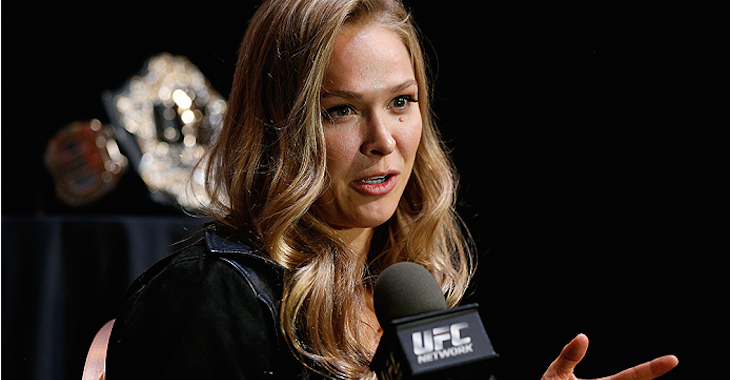 It has now been almost a year since Ronda Rousey‘s last fight: an abrupt, December 2016 knockout loss to reigning UFC women’s bantamweight champion Amanda Nunes. This last Rousey fight, meanwhile, was preceded by an even longer layoff, as her next most recent fight occurred all the way back in November of 2015, when she was knocked out by a Holly Holm head kick.

Given Rousey’s recent inactivity, there is a common perception that she will never fight again. UFC welterweight champion Tyron Woodley shares this opinion, though he does believe there is one possible opponent who could lure Rousey back to the cage: fellow MMA trailblazer Gina Carano. “Gina Carano, maybe,” Woodley explained to TMZ Sports (h/t MMAMania.com). “I think that’s the only other person with a big enough name to make her come back and fight. It’s not a fighter that, like Amanda Nunes that has been wrecking everybody, or like some of these up-and-coming fighters.”

“[Ronda] is such a big household name, she has to fight somebody that is going to match her stature.”

Whether Rousey competes in MMA again or not, Woodley believes she could end up on the WWE roster. According to the UFC welterweight champ, this is probably a wise move for her.

“She can’t do both, she should not do both [pro wrestling and MMA],” Woodley said. “I never want to retire somebody, but I think she’s done enough in the sport of mixed martial arts, and if she wanted to walk away, this might not be a bad time to pull up to a different avenue to open a new chapter in your life.”

Do you think Ronda Rousey could be coaxed back to the cage for a blockbuster battle with fellow WMMA pioneer and current Hollywood star Gina Carano? Join the conversation in the comments section!