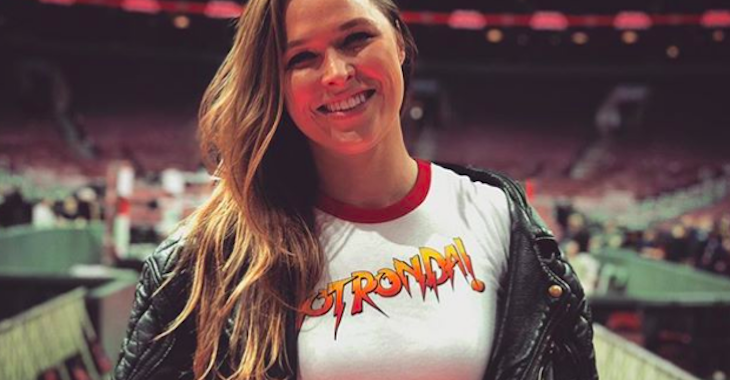 Former Strikeforce and UFC bantamweight queen, Ronda Rousey isn’t fighting in MMA and earning gold title belts anymore. But she is continuing to add different kinds of combat sports titles to her resume.

First, she was an Olympic bronze medalist in Judo before transitioning to MMA. From there she has now recently gone into the world of professional wrestling as part of the WWE. Now, it seems she’s gotten herself into management as well as Golden Boy Promotions announced that welterweight prospect, Ferdinand Kerobyan has been signed as the first fighter under the management of Rousey.

Ariel Helwani would then confirm the speculation of if this meant Rousey was actually becoming a manager or not.

#GBP is excited to announce the signing of welterweight prospect Ferdinand Kerobyan, the first fighter under the management of @RondaRousey pic.twitter.com/7qTBsrjoy8

Confirmed that Kerobyan is in fact managed by Ronda Rousey. New venture for her, One Fight Management. I’m told it’s not limited to boxing. https://t.co/UjkYxPaUbm

Confirmed that Kerobyan is in fact managed by Ronda Rousey. New venture for her, One Fight Management. I’m told it’s not limited to boxing

Happy to have one of the best to ever do it believe in me and push me to my limits. Big things coming stay tuned. @goldenboyboxing @rondarousey

The last time we saw Rousey competing for any sport was back in December of 2016 when she took on Amanda Nunes for the bantamweight title. Things did not end well for Rousey that night…but things have been looking up ever since.

She is now married to UFC heavyweight, Travis Browne and beginning one of two new ventures. The big one though is obviously with the WWE and because of this, Rousey stated recently makes it unlikely that she’ll ever return to the octagon.

“I don’t know. I think it’s just as likely as me going back to another Olympics for judo. No one demanded a written resignation from me for judo and I don’t really think the same thing is necessary for fighting. I’m just doing what I enjoy and WWE is what I enjoy right now.”