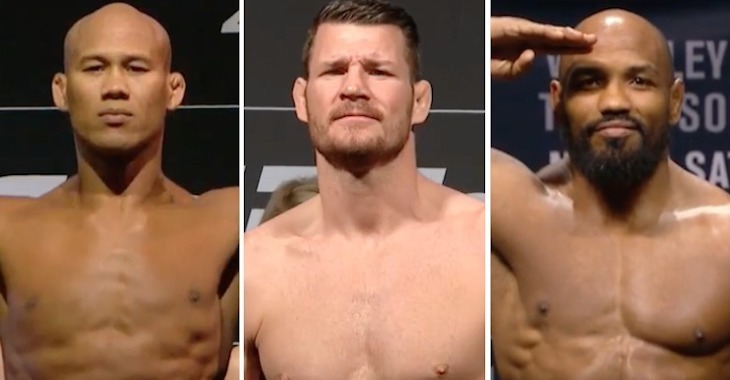 Ronaldo “Jacare” Souza has long stood out as one of the top contenders in the middleweight division, and as a man very much deserving of a title shot. Unfortunately for him, that shot has yet to materialize.

While it’s possible that the Brazilian grappling whiz might receive his long-awaited shot if he simply hung tight and waited for his chance, this is simply not his style. It is for this reason that he accepted a fight with the division’s 14th ranked fighter Tim Boetsch, who he tapped with a first-round kimura on the main card of last weekend’s UFC 208. It’s for that same reason that he’s willing to accept another fight in the meantime, if a title fight with Michael Bisping is not what’s offered to him next.

Jacare explained this willingness during the UFC 208 post-fight press conference.

As far as potential opponents go, its hard to say who Jacare might fight, if not the champ. One option he sees as a possibility is Yoel Romero, who he lost a razor-thin decision to back in 2015. Though UFC President Dana White has confirmed that Romero will receive the next shot at the middleweight crown, Jacare doesn’t believe Bisping will accept this fight. This, of course, would leave Romero out in the cold, which would open the door for their rematch.

“Yes, of course [a Romero rematch] is an option, that’s a fight I want,” he explained. “I’ve never lost a rematch, and with Romero, it’s not going to be any different. I’ll prove I didn’t lose to him. I lost to the judges.”

Who do you think wins a Jacare vs. Romero rematch? Sound off, PENN Nation!