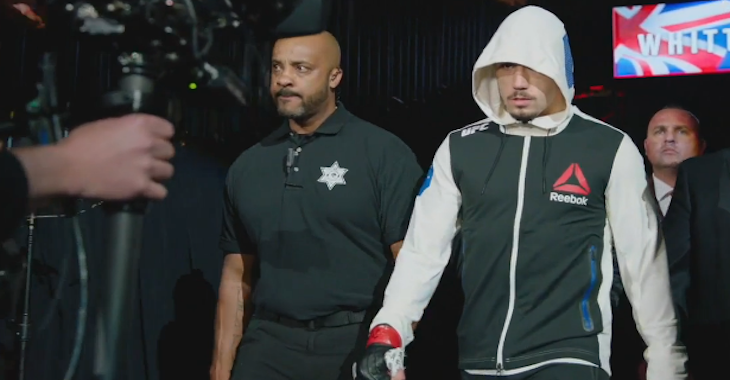 When it was announced that UFC middleweight champion Michael Bisping would next defend his title against Georges St-Pierre – a former welterweight champ who had never fought at middleweight before – there was widespread backlash. Much of this backlash came from the middleweight division’s top contenders, such as Yoel Romero, Luke Rockhold, Ronaldo “Jacare” Souza, and Robert Whittaker.

While this Bisping vs. St-Pierre fight has since been nixed, Whittaker recently reiterated that St-Pierre really had no business fighting for the middleweight title. He explained this feeling in a recent interview with Fox Sports Australia.

“The Bisping versus Georges St-Pierre thing, I’m a huge Georges fan, I’m a fan of Bisping as well, they’re both veterans of the sport — except [St-Pierre] had no business being in the middleweight division,” Whittaker said.

“He had no business being there and it was really just log-jamming the division. It was really offending the rest of us.”

While St-Pierre’s middleweight run has been called off, Bisping is currently on the sidelines nursing a knee injury, which is the reason for Whittaker’s UFC 213 interim title fight with Yoel Romero.

In Whittaker’s opinion, this interim title is very important to the division.

“[The interim title] definitely does [matter to me] because the champ’s been tied up and he hasn’t fought for a long time,” Whittaker explained.

“The division was on hold and it’s at stand still and they needed this to get some blood in it, to get some flowing. Now there’s a reason to fight again.”

“The interim title just means that I’m No.1. That’s all that it means until the champion’s back. It’s kind of like keeping his seat warm.”