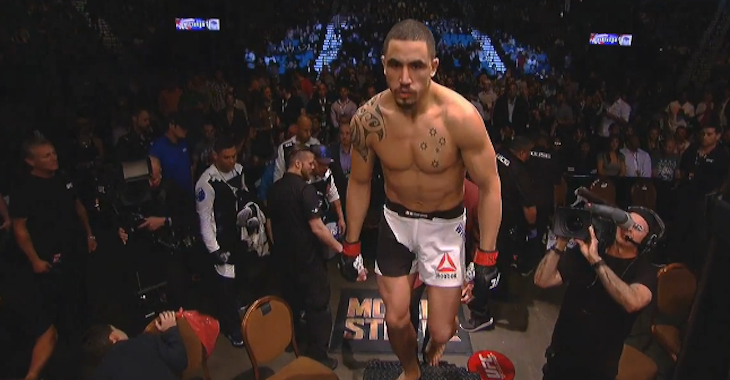 If things had gone according to the original plan, UFC middleweight champion Robert Whittaker would be defending his title against Luke Rockhold at UFC 221 this weekend. Unfortunately, Whittaker was forced out of this fight with some pretty severe health problems, and replaced by Yoel Romero, who will now battle Rockhold for the interim title.

From the sounds of it, it wasn’t easy for Whittaker to withdraw from this fight. The champ has fought injured before, and were it not for the firm guidance of his team, he may have attempted to fight through his current health issues. He recounted the process that led to his UFC 221 withdrawal on Monday’s edition of The MMA Hour:

“I think a lot of my fans and a lot of the general populace know that I have no qualms with going into a fight injured,” Whittaker said. “I’ve gone into many fights injured. I went into the Yoel Romero fight with a torn MCL, I went into multiple fights with broken hands, and that’s never deterred me. And during my prep and my camp, I did my hamstring — I did blow my hamstring out — but I was willing to work around it. So we just worked around it, threw it on the wall, no explosive sort of stuff, and then I got an abscess infection.

“That absolutely knocked me out of the park. I was on antibiotics for that for weeks and it was just really getting out of hand, and we were still — we were still very much, ‘Oh, we can make this work. If we cut out the three weeks we’ve lost now, we can turn it around so that we can just focus on fitness and skill sets and just get it done.’ And at the end of that, when I was thinking maybe we’re not able to fight, I got chickenpox as well. It was the sickest I’ve been in my entire life.

“My coaching staff came to me, my family came to me,” Whittaker added. “They all went to me and sat me down, almost like an intervention, and said, ‘Rob, there is zero chance you’re going to be able to fight. Even if you did get in there, it is so unsafe for you to go out there with no prep and your body as weak as it is.’ And I have to listen to them. I have to listen to my coaching staff, that’s what they do, and that was the call. I was talking to the UFC and they completely understood. They were actually very courteous towards my illnesses, and yeah, it was absolutely gut-wrenching. This is the Perth headline, this is a pay-per-view event, this is the country that I’m representing. And for me not to defend my title here, it’s just gutting.”

Robert Whittaker also updated on his current status, and explained that there’s a major silver lining to his UFC 221 withdrawal.

“I’m good now. I’m a little weak,” Whittaker continued. “I feel a little weak coming back from all of the illnesses, because I was actually bedridden. And you know if you’ve taken two weeks off completely, it’s a nightmare. I was six weeks out in bed and fevers and everything. And then I come back, and a week out from the fight, I think to myself there’s zero chance I could’ve gone in there and confidently said that I could’ve gone.”

“This is funny, because you have to take the good with the bad, all things happen for a reason and all of that — my wife is actually getting induced [into labor] today,” Whittaker said, “because we found out on the weekend that the baby is not growing at the right rate and all of that, so they wanted to speed it up a week. So if I was fighting in Perth, I would’ve missed the birth of my daughter.”

Here’s hoping Robert Whittaker can get back into the cage soon, and that his daughter his born happy and healthy!