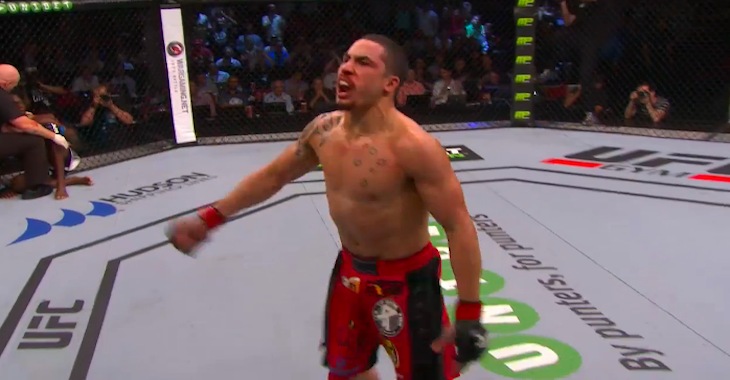 Last night, the UFC returned to sunny Melbourne, Australia with UFC Fight Night 101. Though most of the fights on the 13-bout lineup were somewhat slow, the main event was an absolutely thriller.

That main event pitted Australia’s own Robert Whittaker against Derek Brunson in a clash of rising middleweight contenders. This fight was given the main event spot after the original headliner – a rematch between Luke Rockhold and Ronaldo “Jacare” Souza – was scrapped due to injury.

The battle began with Brunson charging Whittaker down, evidently keen to score an early stoppage an make UFC history as the first fighter to score five first-round knockouts in a row. Regrettably, Brunson’s aggression came at the expense of technique, as he lunged forward, recklessly winging haymakers with his chin out in the open. Though Brunson certainly gave Whittaker some trouble with his ferocious attack early on, he ultimately paid for his lack of defense when he chowed down on a head-kick late in the first round. Several followup left hands later, and Whittaker was being pulled off his dazed foe to the roar of the Australian crowd.

While that Australian crowd soaked in their hometown hero’s massive, first-round win, many of the game’s top fighters took to Twitter to give their thoughts on this wild fight. See some of the best reactions to Whittaker and Brunson’s Fight of the Night winning war below!

Brunson is better than that. Continually running straight at your opponent swinging wildly will get you KO'd. #UFCMelbourne

Damnnn!! Whittaker is no joke! Stayed calm thru the Brunson onslaught, and capitalized on an opening with a BIG left hand!#UFCMelbourne

I like Derek, but man he fought like he forgot to turn the stove off and was doing anything he could to finish the fight ASAP. https://t.co/a9q7Rznrbr

Hoping Brunson makes some adjustments. I feel like hes done that in a few fights and had major success. He paid for it tn. He'll bounce back

Everytime i see this 185er fighting i get so pumped up!
Im telling you guys..im coming for you #TheItalianDream

Wow what a fight!!! #UFCMelbourne

With his first-round defeat of Brunson, Whittaker extended his win-streak to six. Now 5-0 in the middleweight division, the Australian is undeniably ready for a top-5 foe – we hear Gegard Mousasi is looking for a dance partner. In defeat, Brunson returns to the loss column after five-straight wins over game opposition.

How did you react to Robert Whittaker’s epic defeat of Derek Brunson at UFC Fight Night 101? Sound off, PENN Nation!