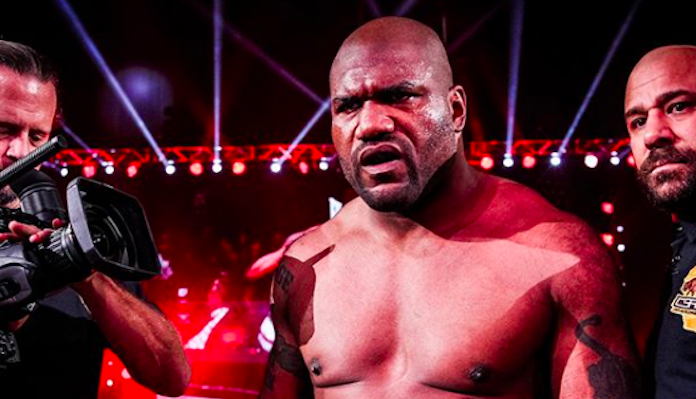 Former mixed martial arts world champions and bitter rivals Quinton Jackson and Wanderlei Silva squared off for a forth time tonight at Bellator 206 in San Jose.

Wanderlei had won the pairs first two meetings, which took place under the now defunct PRIDE FC banner, ending both of those fights with some brutal knees in the clinch.

When the fighters eventually took their talents to the UFC, Quinton Jackson was able to get a dose of revenge on the Brazilian standout earning a devastating one-punch first-round knockout victory at UFC 92.

Tonight Quinton “Rampage” Jackson was able to even the score with his Brazilian rival, earning a second-round TKO victory after a wild back and forth affair.

Here is how the pros reacted to tonight’s sensational scrap between mixed martial arts legends Wanderlei Silva and Quinton Jackson.

Rampage vs Wanderlei 4 is happening right now on @DAZN_USA… So stoked for these two legends to be fighting again! Thanks @BellatorMMA! #Bellator206

For all of you hating on “the old men past their prime” you’re watching and you’re very entertained. No matter the age…we all have a screw loose and we don’t just lose it with age. #Bellator206

THE PEOPLE NEED A 5TH ONE !

Legend @wandfc always giving Show. What a fight, congratulations to both of you for hosting this Show. @Rampage4real

@Rampage4real evening the score vs Silva with that ko! It’s been all bangers tonight #bellator206 @BellatorMMA

Both “Rampage” and “The Axe Murderer” agreed to have a fifth and final showdown following tonight’s thrilling contest. Of course no official announcement has been made by Bellator officials.

Would you like to see a fifth and final grudge match between Quinton Jackson and Wanderlei Silva? Sound off in the comments section PENN Nation!