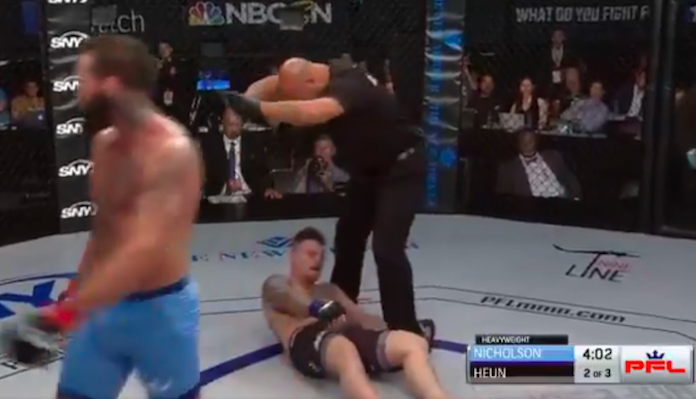 Last night, the Professional Fighters League kickstarted its inaugural season with PFL 1, which went down inside the Hulu Theatre in Madison Square Garden. The event featured the opening rounds of the promotion’s heavyweight and featherweight tournaments.

The card was packed to capacity with excitement. Most notably, it began with a slew of first-round finishes, as Alexandre Almeida, Francimar Barroso and Kevin Tiller put their foes away early.

First-round finishes, of course, are particularly valuable in the PFL. The promotion uses a scoring system that awards six points for a first-round finish, five for a second-round finish, and four for a third-round finish. A decision win, meanwhile, earns the victor three points, and a draw earns both fighters one point. The MO for fighters who want to move ahead to each divisional tournament’s $1 million prize, then, is to finish, and finish quickly.

Here are some of the highlights of the PFL 1 card, featuring a particularly wild, 5-point KO from UFC veteran Alex Nicholson, and a comeback of the year contender from UFC veteran Steven Siler.

Here are the PFL 1 official results:

What was your favorite moment from PFL 1? Who are you picking to win the featherweight and heavyweight tournaments?