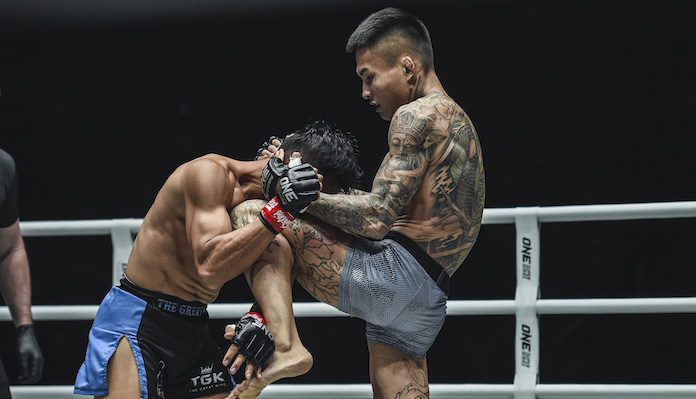 On Friday, ONE Championship returned to Manila, Philippines with ONE: Masters of Fate.

The card was topped by a strawweight title fight between reigning champion Joshua Pacio, and a fellow Filipino in Rene Catalan. Despite a brief scare from Catalan, Pacio retained his title with a second-round submission win.

In the co-main event, Filipino legend Eduard Folayang took on rising Mongolian contender Amarsanaa Tsogookhuu. This fight ended via technical decision after an inadvertent clash of heads forced an early end to the action. The judges awarded the win to Folayang.

Check out the full results and highlights below:

ONE: Masters of Fate – Main Card

Flyweight
Geje Eustaquio defeats Toni Tauru via knockout at 2:11 of round three

Bantamweight
Li Kai Wen defeats Paul Lumihi via knockout at 2:39 of round one

ONE: Masters of Fate – Prelims

Strawweight
Robin Catalan defeats Gustavo Balart via knockout at 4:43 of round two

Featherweight
Kim Jae Woong defeats Rafael Nunes via TKO at 0:38 of round three

Flyweight
Kim Kyu Sung defeats Akihiro Fujisawa via knockout at 1:08 of round one

Flyweight
Roshan Mainam defeats Khon Sichan via submission (arm lock) at 3:22 of round one

What was your favorite finish from this ONE: Masters of Fate card?