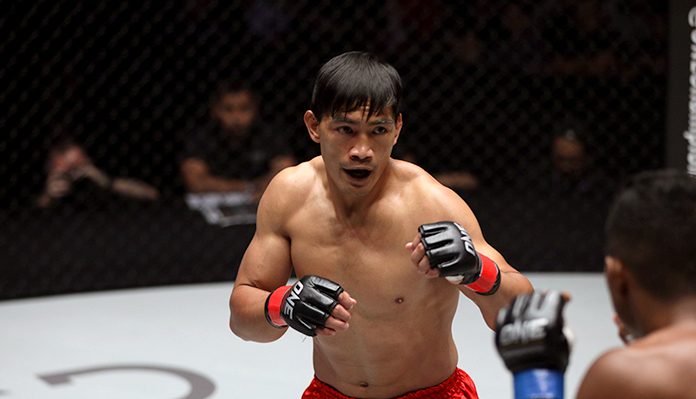 Eduard Folayang is honored to headline ONE: A NEW ERA on 31 March where he will defend his ONE Lightweight World Title at the Ryōgoku Kokugikan against legendary Japanese martial artist Shinya “Tobikan Judan” Aoki.

Heading into this highly-anticipated rematch, Folayang knows he has to put forth the best performance of his career in order to successfully retain his title against the streaking Aoki. As such, he is hard at work in training camp getting ready to put on an absolute show.

“It is truly an honor and a blessing to compete in the main event of ONE Championship’s inaugural event in Japan,” Folayang said.

“In addition, facing a legend like Shinya Aoki is an honor, in front of his hometown crowd no less. I’m excited to face him again in this rematch, and I can only promise to deliver my best performance yet.”

The pair first met in November 2016 in Singapore, where Folayang delivered a scintillating third round TKO victory to capture the ONE Lightweight World Title in his first reign as champion. He has since lost and won back the belt.

Aoki on the other hand has reemerged as a top contender on the heels of three straight finishes.

Eduard Folayang is well-prepared for the challenge at hand, and appears relaxed and calm ahead of perhaps the most significant challenge of his storied career.

“I am not nervous at all heading into this matchup,” Folayang said.

“What I am nervous about is whether or not I will be able to perform to my satisfaction. Winning and losing is already a given in any sport, but it’s how you perform that will give you the most fulfillment. If you are able to do what you wanted to do, there will be no regrets. The only thing we can control is our own selves, especially in the heat of battle.”

Team Lakay stalwarts Danny Kingad and Kevin Belingon will also join Folayang in Japan as they also take part in the said event. Kingad will compete in the ONE Flyweight World Grand Prix and Belingon will defend his ONE Bantamweight World Title against Bibiano Fernandes.

Folayang is happy to have Team Lakay there with him in his corner. The 35-year-old veteran says he draws strength and confidence from his brothers in arms.

“Having the entire Team Lakay behind me when we hit Tokyo is going to be crucial,” Folayang concluded.

“Just the support they offer mentally and physically is already such a huge factor in this. The fact that Danny [Kingad] and Kevin [Belingon] are on the same card just makes things more special.”

Do you think Eduard Folayang will retain ONE lightweight gold in Tokyo?