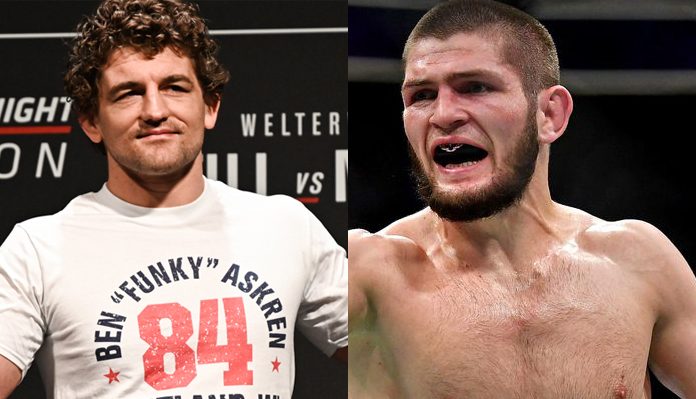 Ben Askren has yet to have his next fight booked but he does have an ideal scenario in mind.

This past weekend at UFC London, the 34-year-old spoke to the media about a number of topics including the creation of a 165-pound division. The former ONE and Bellator champion has been campaigning this new weight class since he signed with the UFC in October. He believes current lightweight champion Khabib Nurmagomedov is the perfect opponent.

“If there’s some way I could make that happen next, I would make it happen – I don’t think I can, right? I think I’m like one or two fights away from that happening,” Askren told MMAJunkie. “But that is something that would be an awesome fight: great storyline, both undefeated, the USA vs. Russia thing always plays. And then you also got like the best wrestler in MMA type of thing playing. So you would have a whole lot of angles to play. That fight would be a lot of fun.”

Ben Askren (18-0) is coming off a controversial UFC debut where he submitted Robbie Lawler in the first round at UFC 235. Many felt referee Herb Dean stepped in too early and the fight should have continued. That, along with UFC President Dana White being adamantly against the creation of a 165-pound division doesn’t bode well for “Funky”

Khabib Nurmagomedov (27-0) hasn’t competed since he defeated Conor McGregor by fourth-round submission at UFC 229 in October. “The Eagle” is currently under a nine-month suspension and was fined 500K for his involvement in the UFC 229 post-fight melee which involved McGregor’s teammate Dillion Danis. It would appear the winner of the scheduled Dustin Poirier vs. Max Holloway interim lightweight title fight at UFC 236 next month would face Nurmagomedov next.