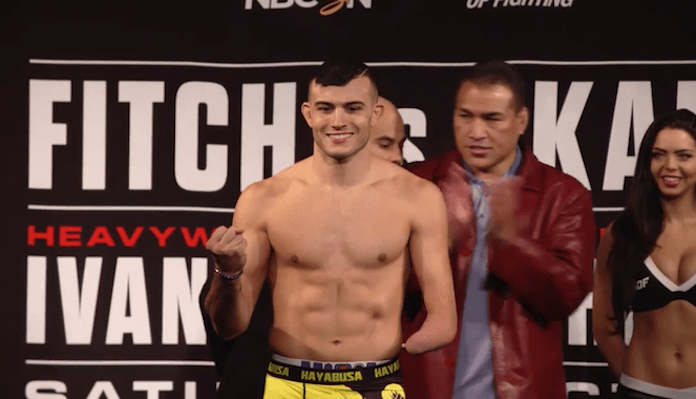 Earlier this week, we learned that Nick Newell, a fighter born with a congenital amputation of his left arm, had met with Dana White in Las Vegas to dicuss his potential move to the UFC. In the wake of these meetings, the expectation was that White would give Newell — and the fans — an answer about his possible move to the UFC in the very near future.

White has now given that answer. Newell will compete on an episode of Dana White’s Tuesday Night Contender Series in June. If he wins impressively, he’s likely to be granted a UFC contract.

This news was first reported by ESPN’s Brett Okamoto.

Nick Newell will get a shot at a UFC contract. Per Dana White, he'll be offered a fight on the Tuesday Night Contender Series in June.

Newell is 14-1 as a professional mixed martial artist. His only loss came courtesy of former World Series of Fighting champion and current UFC star Justin Gaethje, who has since vouched on his behalf.

I believe @NotoriousNewell deserves a shot. This sport hurts and it is unforgiving, much like some mma fans and critics. He will get hurt and lose like the the rest of us, it will not be because he is lacking in skill or suffering from a disability but because we are #Gladiators

“I believe [Nick Newell] deserves a shot,” Gaethje said of Newell in a March Tweet. “This sport hurts and it is unforgiving, much like some MMA fans and critics. He will get hurt and lose like the the rest of us, it will not be because he is lacking in skill or suffering from a disability but because we are gladiators.”

Having only lost once, and to a top-flight foe, Newell probably deserves a UFC contract outright. White, however, has been open about his hesitancy with respect to Newell in the past.

“Tell me somebody he beat that matters and we’ll talk about getting him in the UFC,” White said in a previous interview TMZ. “The kid’s talented. He’s got a ton of heart. I don’t want to see him get hurt.”

Needless to say, White seems to have changed his tune on Newell. The dangerous lightweight will fight for a UFC contract this summer. Unsurprisingly, Newell is thrilled about this chance.

“I want to thank Dana White, Sean Shelby and Mick Maynard for believing in me and giving me a shot,” Newell told MMA Fighting’s Ariel Helwani. “I still have to go out there and deliver. I’m grateful for the opportunity.”

How do you think Nick Newell would do in the UFC?