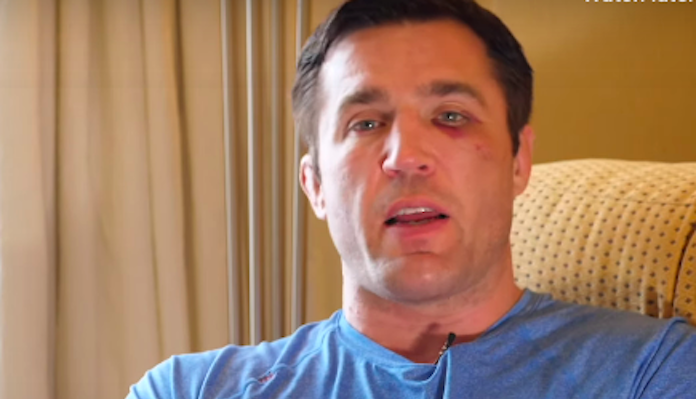 Nick Newell made his Bellator MMA debut on Saturday and finished the fight quickly in front of his home crowd at Bellator 225. Newell hopes the win will lead to a long-term deal with the promotion, and if Chael Sonnen has anything to say about it, that may just be what happens.

“Notorious” took on gritty Tennessee fighter Corey Browning on the featured preliminary bout at Webster Bank Arena in Bridgeport, Conn. After a brief exchange on the feet, Newell took Browning down and patiently improved his position on the ground, leading to an arm triangle choke submission victory.

Sonnen, who was on the desk for the event, had high praise for Newell’s performance — and his career in general.

“Nick’s a stud,” Sonnen said during the Bellator 225 5-Minute Post Show. “You get into this sport to find out if you’re a tough guy, there is never a day in Nick’s life where he has to go to bed and lay there at night and say, ‘I wonder if I’m a tough guy.’ Nick, you’re a tough guy! You qualify as a tough guy.

Newell, a congenital amputee, has inspired people around the world and has become one of the big regional draws in MMA. After being defeated in his opportunity on Dana White’s Contender Series last summer, Newell has picked up back-to-back victories, including the win on Saturday at Bellator 225.

The 33-year-old said during his emotional post-fight interview with the media that he is looking forward to sitting down with Scott Coker and the Bellator higher-ups to secure a long-term contract with the promotion.

Chael Sonnen feels that locking Nick Newell down would be a no-brainer while sharing a story of the first time he spoke with the lightweight standout.

“Oh, I think that’s right,” Sonnen said in regards to Newell getting an extended deal with Bellator.

“I think that Nick’s been a little hard on himself. I had dinner right next to him, just coincidentally, my mother and I, here in Connecticut — when he was in the World Series of Fighting — and he announced his retirement. I went, ‘Wait a minute… retired?’. We’re sitting right next to his family arguing with him, I had never met him before, my mom and I are telling him, ‘What are you doing retiring? You look fantastic!’.

“Fortunately, he didn’t do it because I see it, only bigger and better things are on the horizon for him.”

Do you agree that Bellator should sign Nick Newell to a long-term contract following his win on Saturday at Bellator 225?