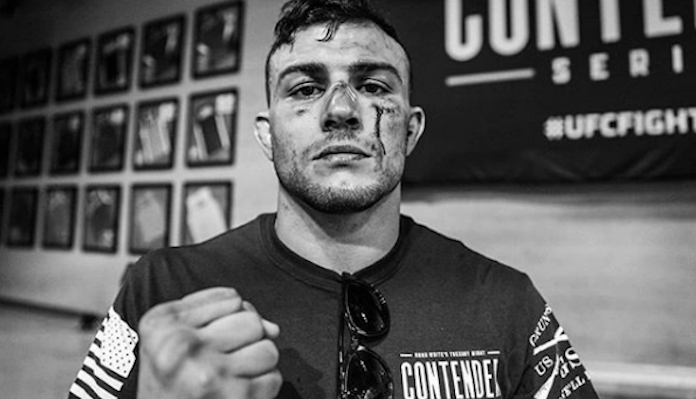 Nick Newell (14-2) has captured the hearts of MMA fans around the world with his great fighting skills and story of perseverance.

The one-armed Newell is a former World Series of Fighting standout whose lone loss in the organization came in a title fight against the then reigning king, Justin Gaethje. A loss that no one can hang their hat on.

Newell would follow-up the loss with back to back wins before calling it a career in October 2015. Three years later and he was ready to end that break. This time he would do so under the LFA banner where he debuted and scored a first-round submission (neck crank) over Sonny Luque. Thus resulting in him finally getting his opportunity to potentially compete in the UFC.

Unfortunately for Newell, his dreams would be halted by the fellow prospect at 155-pounds, Team Alpha Male’s Alex Munoz who would defeat Newell via unanimous decision. Since then, Newell has taken some time off to be with his family and take care of his newborn child.

However, ESPN has now confirmed that Newell will be returning to action on May 31 when takes on Kelvin Hackney (16-5) at CES 56 in Hartford, Connecticut.

“It feels fantastic to be back out there [fighting in my homestate],” Newell said to ESPN. “I didn’t have the performance I would have liked last time, but I know I’m capable of so much more. I know I’m elite in this sport. I need a venue to showcase it, and in front of the hometown crowd is the perfect place to do that.

“I wanted to be there for her (my wife) through the pregnancy. There were a lot of unknowns, so my No. 1 priority was as a father. But now I’m ready to start competing again.”