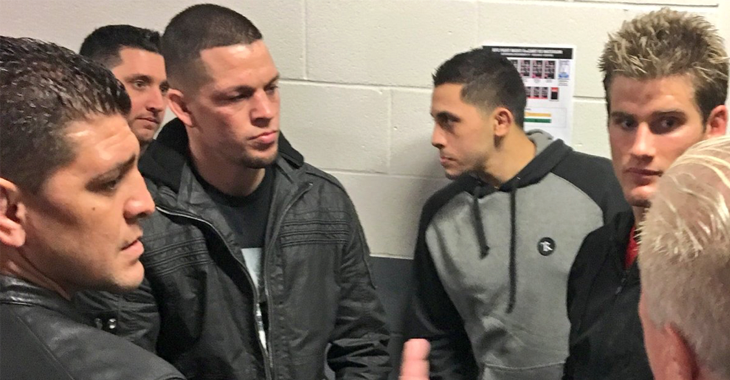 “Ask nicely motherf**kers. Ask nicely. I’m talking about the organization, the fighters. And make it a big deal, because I’m not trying to just sign a contract just cause it’s a good idea for you guys.”

Those are the words from Nate Diaz speaking with the Outside The Box podcast on getting called out by fighters and from the UFC who have been trying to get him into the Octagon for a classic Diaz scrap. Nate stated that at this point in his career, he doesn’t need to fight anyone but is willing to fight any opponent if it makes sense.

“I ain’t trying to do what nobody says. I’ll do what I say,” Diaz said. “And I will fight when I’m approached respectably.”

Here is where a comical MMA fan took the opportunity to play matchmaker going off what Diaz had to say by making a meme of Sage Northcutt asking “nicely” for a fight with Diaz. Urijah Faber posted the piece of Internet gold to social media featuring Northcutt who has been training with Team Alpha Male.

This had me dying! Love that people appreciate the parallel universe of MMA @natediaz209 @supersagenorthcutt #brothers @mma_nerds @ufc

The meme paired Northcutt and the headline of Diaz telling opponents and the UFC to “Ask nicely motherf**kers” says, “Hello Mr. Diaz. I was wondering that if you are free during 2018 if you would maybe like to compete in the Octagon with me. If not it is completely OK. Merry Christmas and God bless you.”

Faber posted the meme as he found it hilarious stating in the caption, “This had me dying! Love that people appreciate the parallel universe of MMA @natediaz209 @supersagenorthcutt #brothers @mma_nerds @ufc.”

Northcutt and Diaz found it comical as they commented on Faber’s post. Even Diaz got a kick out of it replying in the post, “Lol that was nice.” Sage Northcutt met the Diaz brothers last year at the UFC on FOX 22 event where they introduced themselves to each other backstage and had a friendly exchange.