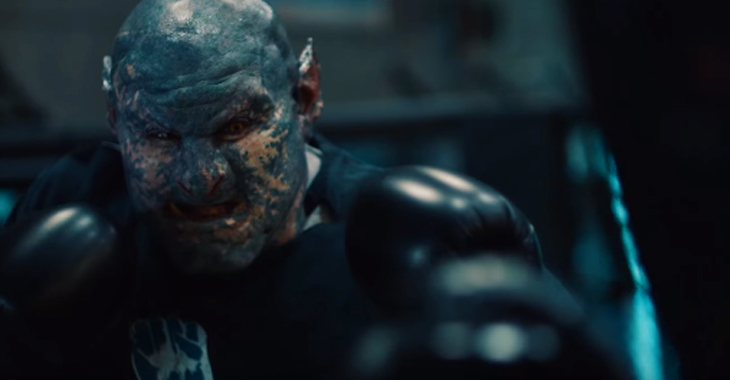 Orcs fighting in the UFC? ‘It’s never going to happen,’ said Dana White in a tongue-in-cheek flashback to when he made the same statement about women. Max ‘Blue Carnage’ Carlyle is just an Orc who wants to fulfill his dreams of becoming the greatest UFC heavyweight on the planet in a sport that doesn’t want him. If you’re left scratching your head, don’t worry because a lot of people are. What you’re seeing is a clever tie-in to Will Smith’s new Netflix film called Bright, where he plays a cop alongside an Orc who dealing with the same sort of discrimination as our prospect Carlyle here.

“One of the central aspects of why I wanted to make the movie was the flip of the social ladder. In our world [in Bright], the elves are the one-percenters. They are the haves. And the orcs are the have-nots. And humans are smashed in the middle. So, it was a great exploration for me to be able to play a character who was higher on the social ladder and to realize how everybody is looking for a sense of superiority.”

“Everybody wants to feel like they’re better than somebody. That’s what our ego does. And whether it’s racism or sexism or nationalism, it really is just a quest for our individual and collective egos to feel like we’re good enough. And it’s just that we feel like we’re good enough by being better than someone else. So, I never comprehended that before playing this character.” — Will Smith speaking to Firstpost.

Written by Max Landis (Chronicle, American Ultra) and directed by David Ayer (Training Day, Suicide Squad), the $90 million Netflix film centers around a world where Orcs, Fairies and Elves are part of our everyday world. It’s a buddy-cop monster movie which attempts to reflect our current political and racially-charged culture climate. It’s available to watch now on Netflix, but it looks like we’ll have to wait for the full Max Carlyle story from the UFC to drop on December 30th.