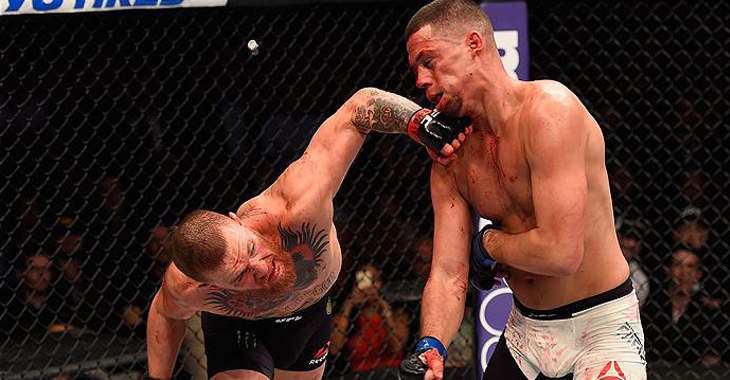 Nate Diaz may be 1-1 with Conor McGregor, but it’s safe to say he took some serious punishment in both fights. During their UFC 202 headlining bout alone, McGregor planted Diaz on his back three separate times with his infamous left hook. However, Diaz says it was all apart of his plan to get Conor to the ground and grapple with him.

Brendan Schaub discussed meeting Diaz at a supermarket shortly after UFC 202 on the Joe Rogan Experience podcast, and Schaub claims Diaz told him he hit the deck on purpose because he knew he couldn’t take McGregor down:

“Is that one of those ‘I meant to do that’ things?” Rogan replied.

“I don’t know. I don’t know Nate Diaz enough to be like ‘are you serious?'”

Diaz found success on ground with ‘The Notorious’ in their first fight at UFC 196, where he locked in a rear-naked choke in the second round after McGregor appeared to be gassing out and rocked following a one-two combination from Diaz.

Although Diaz didn’t appear to be in too much danger following the three knockdowns, McGregor did appear to catch him with clean shots when he put Nate down.

Do you believe Diaz went to the ground intentionally to grapple with McGregor? Or was Diaz simply trying to downplay McGregor’s knockdowns? Sound off in the comments section, PENN Nation!