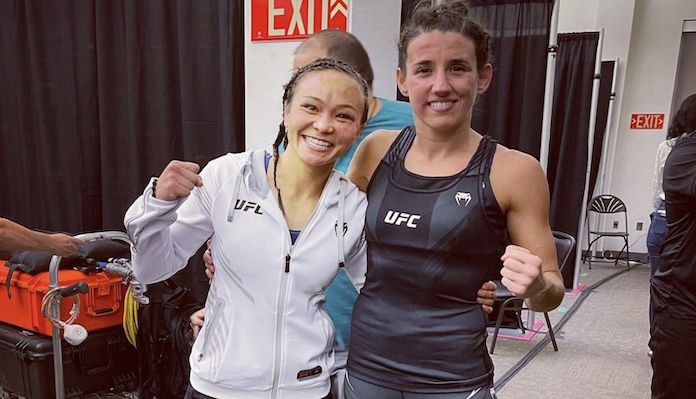 UFC women’s strawweight contender Michelle Waterson reacted after she had “one hell of a fight” with Marina Rodriguez at UFC Vegas 26.

Waterson and Rodriguez both stepped up on short notice for this new main event fight at flyweight after the original headliners, TJ Dillashaw and Cory Sandhagen, fell off the card. Despite both women taking the fight on short notice, they were able to go five hard rounds without slowing down in their cardio. It was a great fight and both women showed their striking, grappling, and durability skills in this one, but ultimately Rodriguez landed far more strikes and landed the harder shots, so she won a clear unanimous decision.

Taking to her social media following the fight, Waterson commented on the defeat and thanked Rodriguez for sharing the Octagon with her on Saturday night in Las Vegas.

Thank you for the dance @marinarodriguezmma one hell of a fight. Thank you @ufc for giving me the opportunity to perform under the lights! Thank you to all my friends, family, and fans for always having my back!! Every time I step into the octagon, I step out a better person. I’ll be back! Love you all

For Waterson, this is actually her third loss in her last four fights, with her lone win during that stretch coming by a split decision over Angela Hill. Otherwise, she has suffered losses to Rodriguez, Carla Esparza, and Joanna Jedrzejczyk in her last four fights. That being said, Waterson is still one of the best in the world in her division and a big star in the promotion, so despite the recent tough stretch, it’s hard to imagine she would drop too far in the rankings from this outing. As for Rodriguez, she is closing in on a title shot.

What do you think is next for Michelle Waterson after losing to Marina Rodriguez at UFC Vegas 26?