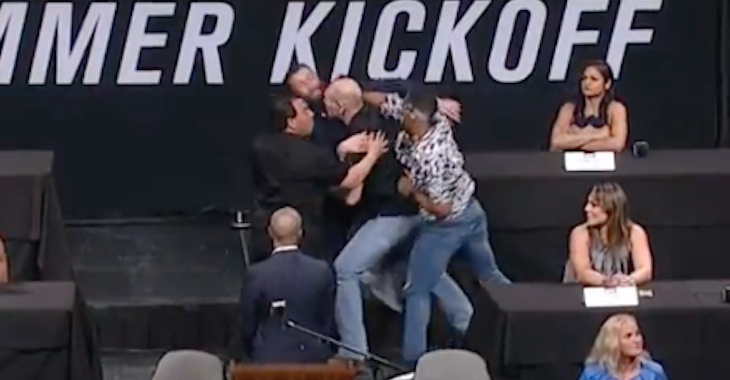 Do not talk about Michael Chiesa’s mother.

With Kevin Lee just mentioning Chiesa’s mother at the UFC Summer Kickoff Press Conference, it hit an immediate nerve in Chiesa, who instructed to Lee to never talk about his mother. Things turned physical when Chiesa rushed over to Lee and was held back by security while Lee slipped under the security’s radar and hit him with a punch.

“There is an unspoken rule with competitors, men and just among people in general that it’s okay to talk shit, it’s okay to promote a fight, but you just don’t bring families into it,” Chiesa said on Monday’s episode of The MMA Hour (transcribed by Danny Segura for MMA Fighting). “People are saying, ‘oh he didn’t even say anything that bad,’ but just the fact alone that the word ‘mom’ came up, and in the manner when you’re saying, ‘oh you’re going to show up and your mom is going to be there,’ and yeah you didn’t say anything that bad, but you were in route to going that path. It’s not up to him to know that I’m a momma’s boy but you know, the media knows, the UFC knows, for Christ’s sake if my mom is in attendance in a fight right after I win, they have a camera on her. That’s just my one nerve, that one button you can push to really get that kind of reaction out of me, so I don’t regret it at all, but I know it won’t happen again.”

With no regrets over how things went down at the press conference, it surely helped to bring attention to their main event fight approaching. Even with taking a punch, Chiesa wasn’t hurt and didn’t even realize he was actually hit by Lee in the incident.

“I didn’t even know he punched me until I got back stage,” Chiesa said. “As they’re pulling me back I was asking Reid, ‘did he punch me? did he punch me?’ and they were like, ‘yeah, dude. He socked you right in the face.’ I think it was a cheap shot because I’ve gone back and watched it, and if you look at the pictures, as I’m running up I get grabbed by two guys and he runs up unattended to and he just punches me.”

Chiesa released a statement on social media following the incident and said that if Lee’s punch was any indication of how he fights in the Octagon, “he’s in deep shit.”

Michael Chiesa and Kevin Lee are scheduled to fight in the main event of UFC Fight Night 112, which takes place on June 25 in Oklahoma City. Who are you picking to win the five-round main event? Sound off in the comment section!