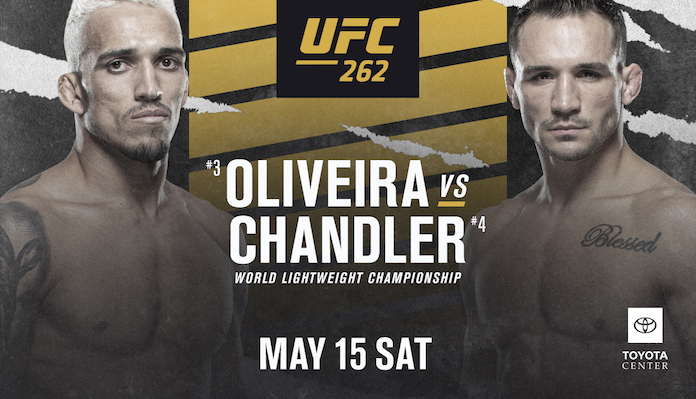 The upcoming UFC 262: Oliveira vs. Chandler pay-per-view on May 15 will take place in front of a full crowd of fans in Houston, Texas.

The UFC made the fight card official on Friday afternoon, officially confirming the Oliveira vs. Chandler main event for the vacant UFC lightweight title, as well as announcing that it will take place at the Toyota Center in Houston with fans in attendance. The tickets will go on sale on April 2. This is the UFC’s second fight card announced in the past week that will feature a full crowd of fans. The other is UFC 261, on April 24 in Jacksonville, Florida.

BREAKING: The Octagon heads to Houston! 🚀

The Oliveira vs. Chandler matchup was possible once UFC lightweight champion Khabib Nurmagomedov officially retired from MMA and vacated his belt. Once “The Eagle” flew back to his nest, the title became vacant and Oliveira and Chandler were available and willing to fight for it. They will now headline UFC 262, which is the first time either man has headlined a UFC pay-per-view. Oliveira has headlined numerous UFC cards in the past and Chandler has been the main event for many Bellator cards, but PPV headliner is a first for both men. Despite neither guy being a massive draw, this fight should still do quite well on PPV and at the box office because it’s a fun fight, and having a crowd back also helps.

In addition to Oliveira vs. Chandler, there are a number of other fights booked for UFC 262, including a lightweight bout between Tony Ferguson and Beneil Dariush, a featherweight bout between Edson Barboza and Shane Burgos, and a women’s flyweight bout between Texas native Andrea Lee and Antonina Shevchenko. Overall the card is shaping nicely, and the UFC might even be able to add another big fight to beef up the main card even more.

Who do you have winning the main event of UFC 262 between Charles Oliveira and Michael Chandler?