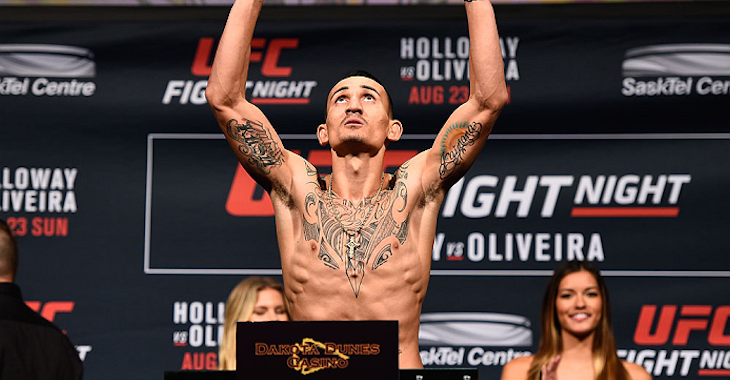 While top ranked featherweight Max Holloway was initially supposed to be fighting former UFC lightweight champion Anthony Pettis in the co-main event of UFC 206 on December 10th, the bout was recently promoted to the main event, and made into an interim featherweight title fight after UFC light heavyweight champion Daniel Cormier, who was supposed to be fighting Anthony Johnson in the main event, was forced out of the fight with an injury.

For Holloway, who is riding a spectacular 9-fight win streak into the bout, a title fight has been a long time coming, and he believes he has now been given an opportunity to cement his place at the top of the UFC’s featherweight division.

“I’m just blessed to have the opportunity to be here. I always wanted to fight for a title, and I always wanted to be the main event of a pay-per-view. I can knock two off the list come Dec. 10, and I think the world is in for a treat.

“I thought I was going to get Pettis as the main event and move to five rounds. I didn’t think it was going to get elevated to a title shot. But the featherweight division was in murky waters, and now it’s super clear. I’ve been telling everybody this is God’s plan, not mine, and God’s plan is perfect. We’re here now, and it’s all about taking opportunities. This is an opportunity I need to take, and it’s the first step toward greatness.”