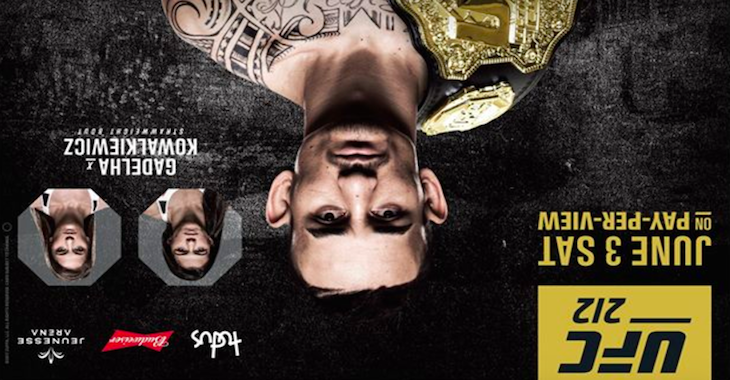 Yesterday, the UFC released the official poster for UFC 212, which will be headlined by a featherweight title unification bout between undisputed champ Jose Aldo, and interim champ Max Holloway. This poster, which is half upside-down, half right-side-up, is a bit of a weird one.

In the past, we’ve seen other fighters complain about their size, position, and placement on official UFC fight posters. UFC light heavyweight champ Daniel Cormier, for example, did so when he first saw the official poster for UFC 210, which showed him, superimposed in front of a massive Anthony “Rumble” Johnson. Given this, some fans expected a negative reaction from Holloway – the upside-down party on this strange UFC 212 poster.

Instead, Holloway has responded quite cleverly. Instead of making a stink, he’s suggested the poster is reflective of the fact that he’s going to “turn the game upside down” when he fights Aldo. Holloway made this clever remark on his official Instagram account. See his post below:

Aldo, meanwhile, will enter the Octagon having not fought since July of 2016, when he defeated Frankie Edgar to win interim featherweight gold. Since then, he has been promoted to undisputed champion, as former undisputed champion Conor McGregor does not appear interested in returning to the division.

In addition to this anticipated featherweight title fight, UFC 212 will feature a strawweight contender bout between Claudia Gadelha and Karolina Kowalkiewicz, the final fight of Vitor Belfort, who will take on fellow veteran Nate Marquardt, and the UFC debut of former World Series of Fighting bantamweight champ Marlon Moraes, who takes on Raphael Assuncao.

What do you think of Max Holloway’s upside-down placement on the UFC 212 poster?