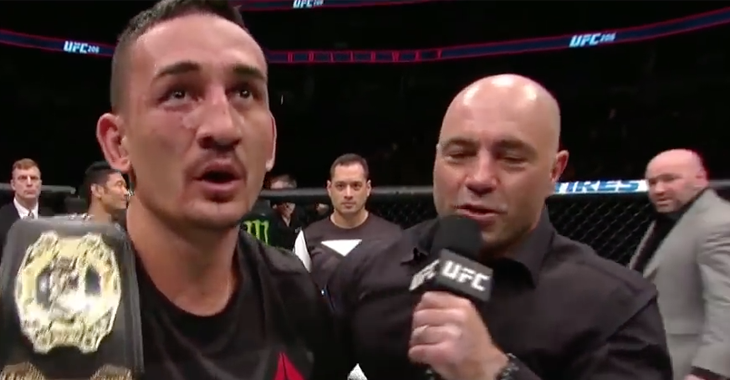 Max Holloway is on a new level now that he is the undisputed featherweight champion and wants to make sure he is being paid like a champion.

At UFC 212, the 25-year-old Hawaiian took out Jose Aldo in enemy territory in Rio de Janeiro, Brazil and was crowned the new king of the 145-pound division.

Now, with the undisputed title in his grasp, Holloway says that before he defends his title for the first time, there are some contract negotiations that he has to deal with by meeting up with UFC President Dana White. “We’re going to figure it out,” Holloway said on Monday’s episode of MMAjunkie Radio (transcribed by Steven Marrocco of MMA Junkie). “Dana White figures it out. He’s the man. Whenever there’s a problem, he always solves the problem, and I think we’re going to get it done.

“We’re setting up the meeting. We’re going to talk, we’ll go from there. Dana White always finds a way to figure stuff out, so I’m looking forward to talking with him soon.”

Holloway did not reveal on the radio show what kind of deal he was looking to get or if he was promised anything in particular with winning the undisputed title. However, the Hawaiian champion knows that by getting his sit down with White, he can work out the financial details. “And we can go from there,” Holloway said. “The 145-pound division is under new management, man, and we’re open 24-7, seven days out of the week. This is the only place you can come in and you can leave with an ‘L,’ and leave with a smile on your face.

“At the end of the day, everybody can get it. If I didn’t fight you, get ready, and if I did fight you, get emotionally ready, because you know what’s going to happen. I’ve never run away from a fight in my life. There’s just some things we’ve got to figure out, and we can go from there.”

Will Max Holloway and Dana White easily come to terms on a new contract? Let’s get your thoughts in the comment section!