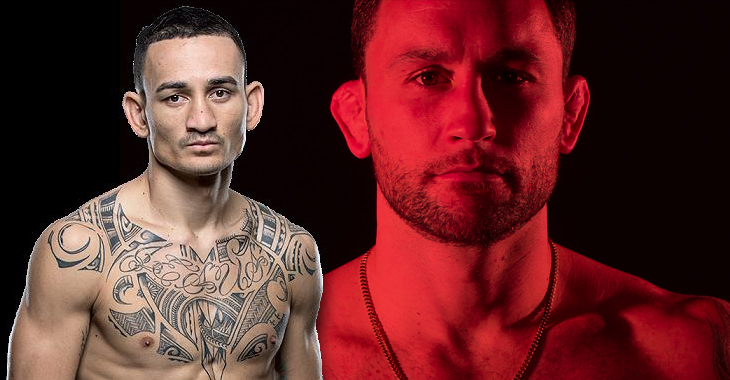 Over the years, Max Holloway has fought tooth and nail to prove he’s the best 145-er in the world. After losing to Conor McGregor, he’s gone on an obscene 11-fight win streak over everyone the UFC threw at him. His righteous onslaught culminated with finishing Jose Aldo at UFC 212, unifying the featherweight titles and breaking records in the process. At this point, there’s basically only one contender left that Holloway hasn’t fought yet. This is where Frankie Edgar comes in. …At least, that’s what Holloway hopes.

“Everyone knows I’ll fight anyone, anywhere, any time. I’ve got a belt to defend. Right now if it’s defending the throne, it’s looking like Frankie [Edgar]. You can’t deny it. The guy’s a legend of the sport, multiple time champ and I can’t wait to get another one on my resume. If Frankie’s the next man up, so be it. I’ve been trying to get this fight forever. I always wanted to fight Frankie, I always wanted to challenge myself. I know he’s a tough competitor but at the end of the day he’s going to have to face me so I’m excited.”

“The meeting [with the UFC] went super well. Like I said before, I had no doubt in the UFC. I love this company. They always find a way, they figure a way to make stuff happen. I think we’re super close. I believe in my heart you guys are going to the ‘Blessed’ one back in the ring before the end of the year so I’m excited. […] Oh yes, I believe I’m going to fight before the end of the year for sure. I think it’s going to happen. I think the meeting went in the right direction yesterday and hopefully we announce something soon.” — Max Holloway speaking to MMA Weekly.

If the UFC truly wants to end out this year with a bang, this would be a great fight to put together. Frankie Edgar has always been the guy at featherweight who took out everyone besides Aldo, now it’s Max Holloway who stands in his way of becoming a UFC champion in two divisions. For Holloway, it would be an important first title defense and the way be can keep ‘The Blessed Era’ carrying on strong.