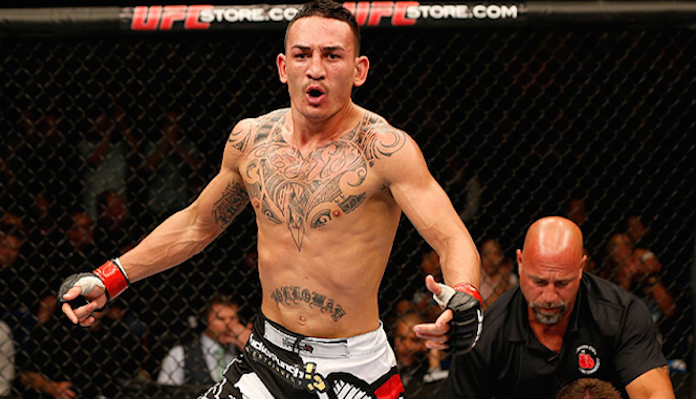 When Californian featherweight Brian Ortega knocked out Frankie Edgar at UFC 222, he usurped the New Jersey native’s spot as the division’s number one contender. Ortega is now poised to challenge reigning featherweight champion Max Holloway for the title, just as soon as the champ is fighting fit.

Speaking on The MMA Hour this week, Holloway explained that, while he’s very excited to fight the undefeated Ortega, he can also envision a world where Edgar racks up a few wins  and earns another title shot.

“Ortega is undefeated for a reason,” he said (h/t MMAFighting). “He’s good. He had knockouts on his record. I thought if he finished [Edgar], it was going to be a submission, because he’s pretty [skilled] there too and he’s super good on the ground. So I thought if it was a finish, it’d guaranteed be a submission. But he went out there and did his thing.”

“This is a sport,” Holloway continued. “It goes on, it keeps it moving. And I wasn’t mad at all. People keep thinking that Frankie is out of the picture completely. After the Ortega fight, we’ll see what happens. A couple more wins and [Edgar] is back in the discussion again, so I don’t really care. It’s time to move on, it’s time to focus on the next guy up, and that’s Ortega supposedly, so I can’t wait. I’m just ready. I’m ready to fight, man.”

Though a date for Max Holloway and Brian Ortega’s highly anticipated featherweight title fight has not yet been set, it’s looking like Edgar will make a quick turnaround and fight at UFC Atlantic City this April 21. There, the long-time contender is expected to battle a fellow contender in Cub Swanson.

What do you think of Max Holloway’s take on the featherweight title situation? Join the conversation in the comments section!