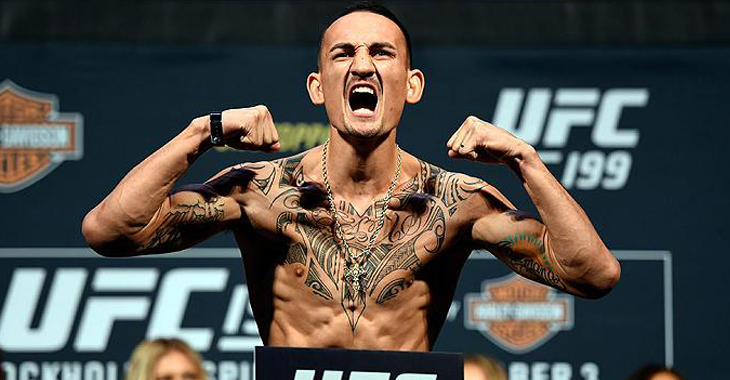 Max Holloway wants to make it clear that he has no problem being motivated. It’s hard to think that anyone out there would ever doubt that he isn’t. After all, Holloway went on a 10-fight win streak before finally he was given the chance at the UFC featherweight title. He was up to defend the belt for the first time against Frankie Edgar, but Jose Aldo stepped in to replace the challenger due to an orbital injury. It is what it is. Holloway now has the chance to beat the former division’s king back-to-back, while Aldo claims he’s motivated for his shot at redemption. Max Holloway begs to differ though, questioning why Aldo wasn’t motivated back at UFC 212.

“This guy is talking about motivation, how motivated he is for the belt. I have no idea when people talk motivation. [Jose Aldo] was fighting at his hometown as the champion [at UFC 212], and for him to be saying motivation, now he feels way more motivated, fighting for your country and fighting in front of your people, for your belt, is not enough motivation? What’s going on? I’m motivated. The belt is great. You know what comes with the belt? Bigger paydays, pay-per-views, and a lot of stuff, but a belt is a belt and a fight is a fight. I don’t want to go out and get my butt whooped, my ass whooped in front of millions of people watching at home. I can fight this guy 10 times in a row. I’ll be motivated, that’s who I am.”

Detroit, you guys are a bunch of tough mfers. I met many of you last month when we visited. You guys deserve the best fight card of the year and youre still gonna get it. I’m fighting no matter what

“I was super willing [to fight a lightweight at UFC 218]. I’m a fighter. I’m saying whoever. I don’t even care. I promised the people of Hawaii, the people of Detroit, I promised my friends, my family. I promised them that I’m going to fight no matter what. The best in the world is not getting ready for just one guy. […] To be honest, [the UFC] didn’t come to me. They said, ‘Here’s some ideas.’ I told my manager, ‘Tell them to call me back when they have a contract.’ A contract to fight Jose Aldo was sent to my e-mail and I signed it. […] At the end of the damn day, I pulled his name and I’m ready to fight. I was ready to go up [to 155lbs] if I had to. It is what it is.” — Max Holloway speaking on the UFC 218 media call.

It is what it is. That’s been Max Holloway’s mantra for this fight. Joe Rogan has screamed about it. Holloway has dropped a shirt featuring it. He was even willing to fight an opponent at lightweight at UFC 219 in order to stay on the card. No one can question Holloway’s dedication just like no one can downplay Jose Aldo’s ridiculous record while he reigned supreme. Aldo now has a shot at taking back the throne, while Holloway will be fighting to make 2018 still the ‘Blessed Era.’ This all goes down in just two weeks at UFC 218 in Detroit.