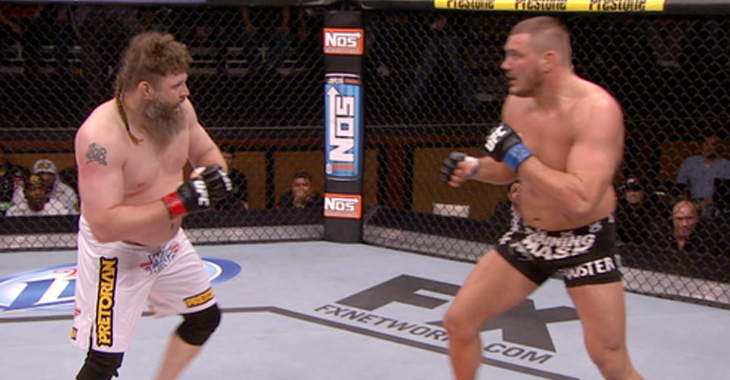 Sometime next year, Matt Mitrione and Roy Nelson are going to throw down again in a rematch from 2012. This time though, it won’t take place in the UFC, it will take place in Bellator’s heavyweight grand prix. Hopefully, the cage will be as large as possible because Mitrione is definitely not a fan of a small cage. He still holds a grudge against former UFC matchmaker Joe Silva, who he accuses of lying to him about the size of the cage in his first fight with Nelson, even claiming he kicked him because of it.

“One hundred percent, [Joe Silva lied about the cage]. Because they know I won’t take a fight in that small cage. That’s one of the reasons why, I would always tell them, ‘what cage is it in?’, ‘we don’t know what it is yet.’ How can you tell me that’s something you don’t know, when I’m the most mobile heavyweight, and I’m actively saying I don’t want to fight in the small cage? ‘We don’t know what it is until we figure out the venue. We just know the date.’ That’s some bullsh-t man. That’s the reason why I kicked him — if you go back and watch the film, I kicked Joe Silva in the stomach right after the [Roy Nelson] fight. I literally threw a bodykick and kicked him in the stomach. He’s like ‘Matt I had gall bladder surgery,’ you shouldn’t have lied to me then.” — Matt Mitrione on The MMA Hour.

Unless it happened off camera or when the broadcast cut to the replay, there is not a visible kick, so we’ll have to take Mitrione’s word on it. As far as Joe Silva, he actually reached out to MMA Fighting to clear up the accusations. He claims that he would never have lied about anything like that and that if he was wrong, it was through no fault of his own. No matter where the truth lies, Matt Mitrione and Roy Nelson will get to run it back again in Bellator.

“I would not lie about such a thing,” Silva said. “There’s no reason to. I’ve never heard anyone use the excuse the cage was smaller as to why they lost. It’s not impossible they made a mistake shipping the wrong Octagon. It’s not impossible they could have given me the wrong information. I don’t even remember this incident in the first place, there was so much going on. But in a situation like that I would get that information from the people who know and pass it on. To say I lied says I did it with intention. Even if I knew the dimensions, with everything we had going on, with so many shows and so many fights to make and so many guys falling out, if I was this evil genius, why would I go out of my way to stick it to Matt Mitrione of all things?” — Former UFC matchmaker Joe Silva via MMA Fighting.