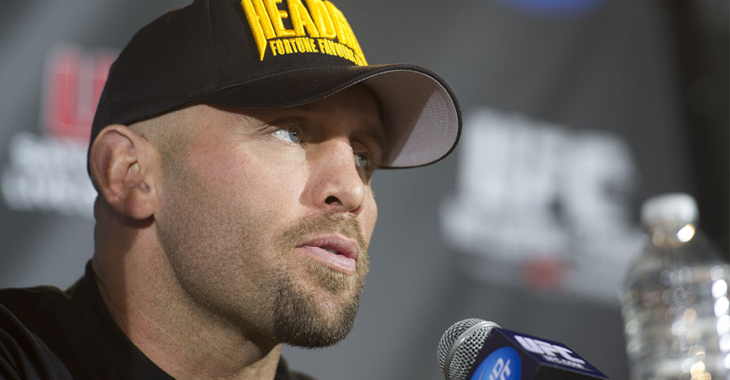 A couple of days ago on The MMA Hour, Matt Mitrione talked about steroid abusers and rampant performance enhancing drug use in MMA. He went so far as to saw that fighters caught on PEDs should be charged with attempted murder. Shane Carwin got wind of this and had a lot to say about the former UFC fighter’s comments. He’s been looking for a way into the Bellator heavyweight grand prix ever since it was announced and he was probably trying on his 5XL gloves directly after he wrote these scathing comments.

“Meathead [Matt Mitrione] brought up an interesting topic about fighter safety. When you are on the receiving end of beatings I can see the concern. My concern is bigger. Is he just dumb or did he take too many blows to the head? I would be worried about the trauma you have sustained and not go searching for the ass beating of your life. Here I am, call your bosses at Bellator MMA. I will knock the silly out of you and my name out of your mouth. If you want to have a serious talk about PED use we can. Yet you left the organization or got cut and signed your name to a tournament full of people who have TUE’s [Therapeutic Use Exemptions] and positive test.”

“I have passed every test administered by the commissions. Post-fight, surprise test and more. If that is your concern what the f-ck are you doing in this tournament? Back to the bigger issue. You may have real brain issues. I understand there is no IQ test to fight, but you sound stupid speaking about me when you signed up to be among a group of people you consider “attempted murders”. I am a dad, a former #1 ranked contender in the organization you could not cut it in. I have fought in the biggest fights, ones you bought on PPV, and I passed every drug test given. It was my team that brought USADA to Zuffa, what did you do? You have a group of fighters signed, all willing to test your questionable chin. You should focus on them. Hey Rich [Chou], I will beat Matt’s ass in or out of the tournament, so amend my offer, please.” – Shane Carwin via his official Facebook.

Originally, Carwin wanted to settle a big boy beef with Roy Nelson in Bellator, now it looks like he’s turned his sights on Matt Mitrione who is also favored to win the tournament and the heavyweight belt. The bouts for the grand prix are set all the way up until May 2018, with tournament alternates to be determined. It’s yet to be seen if Carwin’s trash talk will help hedge his way into the grand prix, but he definitely is stirring the pot.